In this cartoon, political cartoonist Norman Jennett depicted an incident in which North Carolina Senator Marion Butler reportedly mistook a mulatto child for a white child, a mistake described in detail in the text below the image. Butler, a Populist, was a representative of the Fusionist Government (a combination of Populists and Republicans) which had swept the Democrats from power in 1894. Having already regained control of the state legislature in 1898, during the 1900 campaign, the Democrats attempted to reclaim North Carolina’s national legislative offices as well. As Butler was currently running for reelection, this cartoon was designed to both embarrass the Senator and damage his campaign. Blinded by the lens of “negro rule” Butler, and by extension other Fusion leaders, were accused on caring more about the needs of their black constituents than their fellow whites.

Why he Doesn't Know a White Child from a Mullato.

(Special to News and Observer)

MORGANTON, N.C., June 18. - The mother of the mulatto child, who was taken up in his arms by Senator Butler on Saturday, is named Moffitt. The father of the child is a mulatto by the name of Rufus Avery, with whom the child lives. He is called Sam Avery. Butler was speaking to a gang of revenue officers before the Republican County Convention. To illustrate what he called the mournful fact that the ten-year-old-boys would be disfranchised, he caught a child in his arms and stood him on a table. After he had lamented over his pet for ten minutes, a white Democrat called out, "You have caught a mulatto." And so the object lession intended to impress the hearers with the danger of the amendment, resulted in impressing them with the fact that Fusion orators are color-blind. It is the mulattos and negroes, who put Butler in office, for whom he is speaking, and he exposed himself be exhibiting Rule Avery's mulatto son. 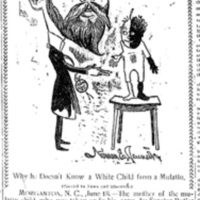