This article, originally appearing in a February, 1865 edition of the New York Times, provides a brief account of the fall of Fort Fisher, the Confederate fort charged with protecting the South’s last remaining major open seaport at Wilmington. In addition to providing the relevant background and contextualizing information, this article includes a significant amount of speculation as to how important the Union capture of Fort Fisher was. According to the article, the loss of Fort Fisher and the port at Wilmington served as a crushing blow to the Confederacy. The inability of blockade runners to bring essential supplies to Wilmington served to cut the Confederate armies off from their main supply depot, bringing about widespread starvation and a lack of proper munitions. The article closes by stating that, due to the vast amount of effort expelled by the Union in closing the Confederacy’s ports, the complete and utter isolation of the Confederate States was completely necessary for a successful Union termination of the Civil War.

From the London Times, Feb. 1.

To the student of the art of war we commend the story of Fort Fisher for its scientific value, and to the general reader for the exceeding interest of the narrative. The fall of this place after a long and terrible fire may not be a deadly blow to the South, but the Federals will look upon it, with justice, as a brilliant success, and be encouraged by it to persevere in their operations against the seacoast towns which still remain in the hands of their enemy. In this expedition there was, thanks to the sternness of the Washington Government, no disagreement of opinion, or, at any rate, of action between the commanders.

The effect of this concurrence on the contending parties can hardly as yet be estimated. According to their usual habit, the Southerners do not attempt to conceal their chagrin at such a loss, and one of their organs confesses, what some have been disposed to deny, that the capture of Fort Fisher will make the port of Wilmington useless for the purposes of foreign trade. But how far this new defeat will increase their disposition for peace remains as yet unknown. Not so, however, with the North. The exultation produced by this victory rather exceeds what might have been expected at a time when the Federals had achieved so many successes. This is perhaps to be explained by the previous failure, which had itself followed the bootless naval operations at Charleston. The revulsion in public feeling tends to make the North overvalue its last exploit. The powers of the fleet, the accuracy with which it was brought into action, frigates and gunboats, ironsides and monitors, each taking up their position and doing their work with the precision of machines, the successful assault on the place coming hard upon the discouraging arguments of Gen. BUTLER, the fierceness of the struggle, and, finally, the prospect of closing the last great port of the South, have combined to fill the North with new confidence. The navy especially is highly gratified at having played so distinguished and useful a part. It is the exploits of this branch of the service which will be of the most interest to our professional men. It seems to be ascertained that the fire of the fort had little effect on the hulls of the American iron-clads. They are said to have suffered little, the marks of the Confederate fire being only certain indentations on their sides, and the shooting away of their boats and the lighter parts of their equipment. If a dispatch, which we publish to-day, is to be trusted, Admiral PORTER believes that he possesses a vessel which could destroy any ship of the British or French navy, lay our towns under contribution, and chase away anything which we might send to blockade American ports. The ironclads lay for five days within 800 yards of Fort Fisher, and received no material injury. If the Confederate guns are capable of comparison with our own, the question of ships against forts may prove to have been considerably advanced by these experiments. Every fight across the ocean should be a lesson for us, and this last deserves to be studied with unusual attention.

BRILLIANCY OF THE VICTORY.

From the Manchester Examiner, Feb. 2.

No event of the war has reflected more credit upon the military administratration of the North than the capture of Fort Fisher. After the failure of the first campaign, it was an act of singular boldness forthwith to order a second, but the result has shown that, though bold, it was not rash, and that the original combinations would have succeeded but for the incapacity of the leaders. To General BUTLER the discomfiture is complete. His position is uncomfortably absurd. He was entitled to speak with some authority, for he had seen Fort Fisher. He had landed his troops, and marched them to within a few hundred yards of the fortifications, surveyed the works with the eve of a General, and found them to be impregnable. His report of the failure has the vice of giving two reasons. In the first place, the works were practically impregnable, a reason which of itself would have been sufficient. But, in the second place, he was very much afraid that Gen. HOKE would march down upon him from Wilmington with a force which he would have been unable to withstand. HOKE did not come, but then he might have come, if BUTLER had waited long enough, which he resolved not to do. The Government replied to these explanations by relieving BUTLER of his command, and ordering the expedition to start again. Admiral PORTER, as before, was at the head of the fleet, but the troops were put under the command of Gen. TERRY. The order of attack was the same on the second occasion as on the first. A furious bombardment from the fleet cleared the works of all visible defenders, the troops were landed under cover of the fire, and, to guard against a visit from Gen. HOKE, a strong body of troops was posted across the peninsula between the fort and Wilmington. The assault began at 3 1/2; in a short time the defences were in the hands of the assailants, and by 10 o'clock the same night, after desperate fighting, all the works were captured. The occupation of the peninsula necessarily cut off all escape of the garrison. They retired toward the end of the spit of land on which the fort is built, where, with the sea on three sides, and a victorious enemy on the other, their fare was settled. The Federals purchased their success with a severe loss in killed and wounded, but looking at the market price of victories, perhaps none of equal importance have been won at a cheaper rate.

From the London News.

It is natural that the Americans should exult over this success in a degree which even its intrinsic importance might not warrant. It is the most protracted and desperate fighting which the war has yet seen, and no exploit of any other nation surpasses it in these respects. They are well entitled to take credit for the furious resistance of the defenders, Americans too, as they are for the tremendous material powers and unflinching vehemence of the assailants, which overpowered the defence. But besides all this, of which any army and any people might be proud, they have especial resons for rejoicing. The result has turned a discreditable failure into a glorious victory. The loss, indeed, has been heavy, and Admiral PORTER points the moral which we ventured to draw when the telegraphic dispatch arrived, by his observation that the garrison had been multiplied ten times since BUTLER's reconnoissance, and that the loss which is to be deplored is necessarily increased in a still greater proportion. But beyond a doubt the loss, even now, has been well paid down. It is admitted that the port is sealed, and that the trade and profit of blockade-running is at an end. And it is only foolish braggadocio in the Richmond papers to pretend that this is a blow which brings them any countervailing advantages. It liberates for them no army and no fleet. It establishes the Federals in a new position on their flank. It cuts off all ingress of foreign stores, and shuts out the last gleam of hope of foreign recognition. Against all this it is but a poor consolation for them that it will cause the loss to the Yankees of their profit on the captured cotton of blockade runners. This is a profit which the Federals may afford to renounce, gaining in exchange the port whence the cotton was shipped, and through which the profits of the cotton that escaped reached their enemies in the shape of foreign munitions of war, that the Confederate States cannot of themselves supply.

ISOLATION OF THE CONFEDERATE STATES NECESSARY.

The London Times, remarking on the success at Fort Fisher, observes that usually the Winter had been a time of involuntary armistice, but now in the depth of the season, and amid the dangers of sudden tempest and a fatal coast, the Federals have won their last victory, and may succeed in totally closing or destroying the last considerable port of the Confederates. To give the South no term of respite, no opportunity for fresh preparations, no breathing time which should refresh it for new exertions, is the policy of the Cabinet. It is difficult to believe that the capture of Fort Fisher will not lead to other successes, which will either place Wilmington in the hands of the Federals, or render it useless as a port for blockade-runners. It will be seen, then, how far the South is capable of doing without that which England has hitherto furnished her. The vast efforts which have been made by the Federals to shut up the Southern posts, and the perseverance with which the design has been pursued, proves that, in the opinion of those best informed, the isolation of the Confederate States is necessary for the successful termination of the war. 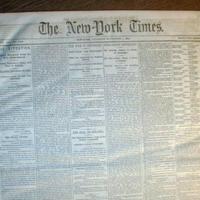