In 1816, North Carolina Quakers, under the leadership of Levi Coffin, founded the Manumission Society whose
goal was to manumit the slave population and abolish the institution in the United States.  “The Address to the People of North Carolina,” commissioned by the Society’s General Association and represents the Society’s belief in the unchristian nature of slavery.  The address identifies the group’s core issues with the intuition by stressing the cruelty of the evil institution.  Additionally, they claimed that “absolute slavery is a fruitful source of pride, idleness and tyranny.”  The Quakers represent just one of many arguments against slavery in the North Carolina and the United States.

"An Address to the People of North Carolina, on the Evils of Slavery. By the Friends of Liberty and Equality," Documenting the American South, Universtity of North Carolina at Chapel Hill, Accessed on April 11, 2012, http://docsouth.unc.edu/nc/manumiss/manumiss.html.

We believe it is generally known that a social institution has, for some years, been progressing, for "the gradual abolition OF NEGRO SLAVERY" among us: yet we are well aware that our precise views in relation to this subject are but partially understood. In the commencement of our investigations we used the utmost prudence, knowing the irritable disposition of those, (and at that time many there were,) who, from want of reflection on the subject, felt, or seemed to feel their dearest rights invaded by the least attempt to examine into the policy or rectitude of holding the African race in a state of slavery. We proceeded then as we ought, with all possible caution & reserve; never venturing to discuss rashly, and seldom stirring the subject far abroad. We thought it not only advisable, but the only justifiable course, in the first place to examine, weigh, and deliberate profoundly within our own more immediate circles, the fundamental principles of the Institution, and ascertain if possible, from the best human calculations, to what extent could our labours probably succeed, and what would be the probable consequences of giving unrestrained publicity to our doctrines, by circulating them generally throughout the country. All this we trust has been done. We have taken a deliberate survey of this land of slavery. We have impartially examined the evil in its origine, its progress, and in its present state, as well as its future consequences; and even in its mildest form, it shrinks from rational inspection--a monster of hideous deformity in its best feature.

We profess to have considered the matter on all sides, and to have made every due allowance for the peculiar situation of all parties, whether slave-holders, monster-slave holders or slaves, and seriously, we cannot longer hesitate as to the course that our common duty, interest, and prosperity demand. Discussion has been too long delayed already, and is now rendered the more indispensable, as the evil to be removed is daily accumulating on our hands. And we are divinely admonished to "work while it is day, for the night cometh when no man can work."

Whatever the people of this State may be with respect to information on other subjects, on this they are very destitute, owing, we suppose, to the "awful delicacy" we hear so much about, and which we would briefly examine. Then what renders this subject so awfully delicate? Is it the incapacity of the people to investigate it?--Is the discussion of this subject delicate because it favours the innocent and condemns the guilty? Is it delicate because it shows republicans their inconsistency? Is it delicate because it accuses the professors of the Christian Religion of crimes which a Mahomedan would blush to commit? Is it delicate because it impeaches the right to hold human beings as property? Is it delicate because free men are ashamed or afraid for slaves to know that they incline to do them justice? If any of the above considerations are to restrain the rational enquiry of this community, fare-well to manly enterprize in North-Carolina! But we yet hope for better things. This is an age of active enterprize. A spirit of inquiry is partially awakened which no earthly authority or artful dissuasion can effectually restrain.

Under the protection offered by our Constitution in the 18th section of a Declaration of rights made by the Representatives of the Freemen of this State, we now set out in a calm, and more full investigation of the evils consequent on the existence of absolute slavery. And as we cherish no unkind feelings toward any class of our citizens, but prompted, by philanthropy and patriotism, we labour to expose inconsistencies, and to hold up to public gaze, and we hope to public execration, principles that tend to destroy our liberties, our morals, and even our souls; we hope that every man having an opportunity to examine this subject with us, will do it impartially and honestly, in attending to, and investigating the following propositions:

II. It is founded in injustice and cruelty.

III. It is a fruitful source of pride, idleness and tyranny.

IV. It increases depravity in the human heart, while it inflames and nourishes a numerous train of dark and brutal passions and lusts, disgraceful to human nature, and destructive of the general welfare.

V. It is contrary to the plain and simple maxims of the Christian Revelation, or religion of Christ.

After demons rating these propositions we shall briefly state in conclusion, some of the most prominent features in the plan which we would adopt for the abolition of slavery.

Absolute slavery, is a fruitful source of pride, idleness and tyranny.

This proposition is proved to be true by the common experience of mankind; and in a manner too, that must force conviction upon every imprejudiced and observing understanding. But it may nevertheless, be asked, when does slavery begin this mighty work in the human soul?--We answer, as soon as embryo reason begins to exert itself, it is, through this medium, perverted, and the little strength which it has acquired, is, by a wretched application, turned to its own destruction. The little child begins to view itself in contrast with its black associates; and while it discovers that these little creatures, as well as their fathers and mothers, are all destined to labour for white people, it imagines itself attached to a superior race of beings. And when grown a little larger, it finds these wholesome ideas greatly strengthened by being permitted to command TOM or BET to this or that, according as its whims or fancies may direct. These things dispose the heart to pride, and not unfrequently to tyranny itself. This disposition to "look down" on the part of mankind which does not possess the same advantages with ourselves, and which has been so successfully implanted in the minds of these little masters and mistresses, by a comparison of their own exalted worth with that of the degraded negroes, grows and strengthens with them. They next begin to compare themselves with the more humble and destitute of the neighbours, and find their own superior greatness more fully demonstrated: and the same contempt which they cherish for the negro they now begin to cherish towards the white peasantry, lessening, however, in proportion as they advance from poverty and humble life towards wealth and affluence. It is here also, that the disposition to "grind the face of the poor," and to "oppress the hireling in his wages," so common among the wealthy, and by far too common with the middle classes of our citizens, receives its first impulse. The children of these parents who own slaves, and think, or seem to think it not amiss to storm and drive, with all the hurry and fury of which they are capable, learn to act in a similar manner. And it is a fact too well known (at least by the poor) to admit of successful controversy, that the man who will oppress and abuse his own slaves, will also, when an opportunity is afforded, oppress his indigent neighbour, or any one else over whom he may have gained an advantage. This principle strikes at the root of our republican institutions, and if suffered to become sufficiently strong, would overturn even our liberty itself. But there is no alarming prospect at this time, of such principles getting to such a height among us, if they be timely and sufficiently opposed by the people, whose privilege and interest is to oppose them. Yet this much is certain, that by such principles as these, our fine gold has become dim, and much of our rising glory has been lost! We might say much more on this subject, but as it may be necessary, in attending to the next proposition, to advert to some things primarily embraced in this, we defer their consideration until called up in support of facts more lamentable, yet not less true than those embraced in this proposition. 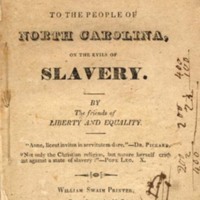 Manumission Society of North Carolina , An Address to the People of North Carolina on the Evils of Slavery by the Friends of Libersty and Equality, 1830, Civil War Era NC, accessed February 8, 2023, https://cwnc.omeka.chass.ncsu.edu/items/show/379.