This account by Lieutenant Colonel George Nichols described the Union Army as it entered the city of Goldsboro. Many soldiers had faced the brunt of two of the biggest battles General William Sherman and his men had seen since leaving Georgia. The battles at Bentonville and Averasboro both ended in success for the Union, but the men arrived in Goldsboro, “ragged, bareheaded, shoeless,” needing, “want covering for their naked limbs.”  Goldsboro offered the perfect opportunity for the soldiers to recover. A few days after entering Goldsboro, on the 23, the soldiers received materials and food from coastal North Carolina, after the railroad had been repaired in Goldsboro. Entering in such rough condition, as described by Nichols, Sherman and his men could have easily continued to forage liberally, but instead restricted the practice, as aid was coming from the coast. This helped demonstrate how foraging, according to Sherman and his men, was done as a necessity. The above image is of wounded Union soldiers, not the ones Nichols discussed, but a similar picture.

Goldsboro’, March22d.- The army has entered Goldsboro’. Its march has been delayed seventy hours by Johnston’s operations, but the interruption has not materially interfered with the plans of our General. Yesterday General Terry moved up to Cox’s Bridge, laid a pontoon, and crossed a part of his troops. General Schofield is in Goldsboro’. Our army will at once be moved into position in the vicinity of this place to refit for the next campaign; not only to be reclothed, but to gain the repose it needs. Minds, as well as body, requires rest after the fatigues of rapid campaigns like these. These ragged, bareheaded, shoeless, brave, jolly fellows of Sherman’s legions, too, want covering for their naked limbs.

Yet, with all the hardships of the campaign, the surgeons’ returns show the wonderfully healthy condition of the army. Only two per cent of sick are in hospital. A much larger proportion of the army would be in hospital had we remained quietly in camp during the past two months. The great majority of the soldiers are strong, healthy, cheerful, confident. The mental strain, however, is visible in the general air of lassitude in the army. Relief from active duty for a few days will restore the balance, and remedy this evil.

…Therefore, we are glad we have reached a place of rest. With a few days of quiet for animals and men, rehabilitated mentally and physically, and equipped with supplies for future wants, we will soon be ready to strike another blow for our nationality. 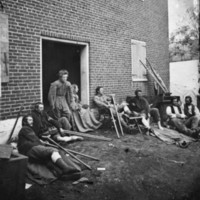