Lt John Wilkinson recounted his action taken to avoid capture by a Union blockader upon the leaving the port at Wilmington. He described what maneuvers and diversionary tactics he used to evade his pursuer and even gives an account as to some of his passengers on the journey from Wilmington to Nassau.

We were ready to sail for Nassau on the 15th of August, 1863, and had on board, as usual, several passengers. Indeed we rarely made a trip either way without as many as could be accommodated, and many ladies among them. My observation of the conduct of the fair sex, under trying and novel circumstances, has convinced me that they face inevitable dangers more bravely and with more composure than men. I have frequently seen a frail, delicate woman standing erect and unflinching upon the deck, as the shells were whistling and bursting over us, while her lawful protector would be cowering “under the lee” of a cotton bale. I pay this humble tribute of admiration to the sex, but a cynical old bachelor to whom I once made the observation, replied that in his opinion their insatiable curiosity prevailed even over their natural fears!

On our outward voyage we had among our passengers ex-senator Gwin and his daughter, and Dr. and Mrs. P. We passed safely through the blockading fleet off the New Inlet Bar, receiving no damage from the few shots fired at us, and gained an offing from the coast of thirty miles by daylight. By this time our supply of English coal had been exhausted, and we were obliged to commence upon North Carolina coal of very inferior quality, and which smoked terribly. We commenced on this fuel a little after daylight. Very soon afterwards the vigilant look-out at the mast-head called out “Sail ho!” and in reply to the “where away” from the deck, sang out “Right astern, sir, and in chase.” The morning was very clear. Going to the mast-head I could just discern the royal of the chaser; and before I left there, say in half an hour, her top-gallant sail showed above the horizon. By this time the sun had risen in a cloudless sky. It was evident our pursuer would be alongside of us by mid-day at the rate we were then going. The first orders given were to throw overboard the deck-load of cotton and to make more steam. The latter proved to be more easily given that executed; the chief engineer reporting that it was impossible to make steam with the wretched stuff filled with slate and dirt. A moderate breeze from the north and east had been blowing ever since daylight and every stitch of canvas on board the square rigged steamer in our wake was drawing. We were steering east by south, and it was clear that the chaser’s advantages could only be neutralized either by bringing the Lee gradually head to wind or edging away to bring the wind aft. The former course would be running toward the land, besides incurring the additional risk of being intercepted and captured by some of the other inshore cruisers.  I began to edge away therefore, and in two or three hours enjoyed the satisfaction of seeing our pursuer clew up and furl his sails. The breeze was still blowing as fresh as in the morning, but we were now running directly away from it, and the cruiser was going literally as fast as the wind, causing the sails to be rather a hindrance than a help. But she was still gaining on us. A happy inspiration occurred to me when the case seemed hopeless. Sending for the chief engineer I said “Mr. S., let us try cotton, saturated with spirits of turpentine.” There were on board, as part of the deck load, thirty or forty barrels of “spirits.” In a very few moments, a bale of cotton was ripped open, a barrel tapped, and buckets full of the saturated material passed down into the fire room. The result exceeded our expectations. The chief engineer, an excitable little Frenchman from Charleston, very soon made his appearance on the bridge, his eyes sparkling with triumph, and reported a full head of steam. Curious to see the effect on our speed, I directed him to wait a moment until the log was hove. I threw it myself, nine and half knots. “Let her go now sir!” I said. Five minutes afterwards, I hove the log again, thirteen and a quarter. We now began to hold our own, and even to gain a little upon the chaser; but she was fearfully near, and I began to have visions of another residence at Fort Warren, as I saw the “big bone in the mouth” of our pertinacious friend, for she was near enough to us at one time for us to see distinctly the white curl of foam under her bows, called by that name among seamen. I wonder if they could have screwed another turn of speed out of her if they had known that the Lee had on board, in addition to her cargo of cotton, a large amount of gold shipped by the Confederate Government? There continued to be a very slight change in our relative positions till about six o’clock in the afternoon, when the chief engineer again made his appearance, with a very ominous expression of countenance. He came to report that the burnt cotton had choked the flues, and that the steam was running down. “Only keep her going dark, sir,” I replied, “and we will give our pursuer the slip yet.” A heavy bank was lying along the horizon to the south and east; and I saw a possible means of escape. At sunset the chaser was about four miles astern and gaining upon us. Calling two of my most reliable officers, I stationed one of them on each wheelhouse, with glasses, directing them to let me know the instant they lost sight of the chaser in the growing darkness. At the same time, I ordered the chief engineer to make as black a smoke as possible, and to be in readiness to cut off the smoke, by closing the dampers instantly, when ordered. The twilight was soon succeeded by darkness. Both of the officers on the wheel-house called out at the same moment, “We have lost sight of her,” while a dense volume of smoke was streaming far in our wake. “Close the dampers,” I called out through the speaking tube, and at the same moment ordered the helm “hard a starboard.” Our course was altered eight points, at a right angle to the previous one. I remained on deck an hour, and then retired to m state-room with a comfortable sense of security. We had fired so hard that the very planks on the bridge were almost scorching hot, and my feet were nearly blistered. I put them out of the window to cool, after taking off slippers and socks.

While in this position, Miss Lucy G. came on the bridge in company with her father. Tapping my foot with her hand, she said, “Ah, captain, I see we are all safe, and I congratulate you!.” At one time during the chase, when capture seemed inevitable, the kegs containing the gold had been brought on deck, and one of them opened by my orders, it being my intention to distribute its contents among the officers and crew. Miss Lucy, who preserved her presence of mind throughout the tiring scene of the day, called me aside, and suggested that she should fill a purse for me; and I have no doubt she would have accomplished her intentions if occasion had required. The chase proved to be the Iroqouis. Feeling confident that she would continue on the course to Abaco, and perhaps have another and more successful chase, I changed the destination of the Lee to Bermuda, where we arrived safely two days afterward. 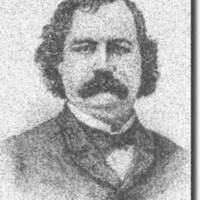