This is North Carolina Supreme Court Justice Thomas Ruffin's second draft of his decision in the State v. Mann decision in 1830. Ruffin's ruling was one of the most controversial decisions in North Carolina's history as well as one of the most abominable court decisions regarding slavery. The second draft of this decision is important because it shows that Ruffin nearly ruled in Mann's favor on procedural grounds. If Ruffin had used this logic in his decision, the case would have had the same outcome, only without the controversial decision. This is further evidence that Thomas Ruffin used the Mann decision to protect the institution of slavery. 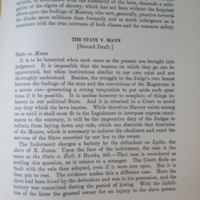