John Brown's Raid of Harper's Ferry ended on October 18, 1859, and it took a couple days for news to reach North Carolina. At first, assumptions were made about the raid, until October 20th, when a mail bag reached Fayetteville, providing letters and other first hand accounts of the raid. This newspaper synthesizes these accounts and provides the people of Fayetteville an account of the events that occurred in Harper's Ferry. The focus of this newspaper revolved around the events that transpired at Harper's Ferry, rather than the events leading up to the insurrection.

Startling news from Virginia.-Yesterdayâ€™s mail brought us accounts of an outbreak at Harperâ€™s Ferry, Va., accompanied with stories of an abolition and negro insurrection, loss of lives. It is manifest that the accounts so far are mainly guess work. This morningâ€™s mail may bring us something more definite and reliable, and of course we will add it to this.

It is of course known that Harperâ€™s Ferry is the seat of a U.S. Armory, at which many northern and foreign artisans and laborers are employed. The reports indicate that these have combined with the negroes, and that on Sunday night they took possession of the town, the Armory, Arsenal, Pay Office, and all government property, cut the telegraph wires, stopped all the trains of cars, Killed several persons, and barricaded and fortified the town.

The news was transmitted from Frederick, Va., to Baltimore, by numerous despatches during Monday. Immediately several companies of Maryland volunteers were sent from Baltimore and Frederick, by the Governor of Maryland, a regiment from Jefferson county and two companies from Richmond, by the Governor of Virginia, and 100 Marines with 2 twelve-pound gun from Washington by the Government. When the nearest of these arrived, from Jefferson and Frederick, about midnight, an immediate attack was made on the insurgents, who were driven into the Armory, which was barricaded. Shortly after, the marines and Baltimore troops arrived, the doors were forced in the midst of firing from both parties and the Armory carried at the point of the bayonet. It is said that a number were killed and wounded on both sides. All the tiring insurgents were captured, and would have been despatched summarily but for the interference of the marines.
The insurgent were estimated at 750 men, armed, but this is doubtless a great exaggeration. Another account says 250 white men and 100 negroes, and that the negroes were forced into the service. Another still says 200, black and white.

The most probable version of the affair is, that â€œit originated in some government employees, who, having been swindled by a government contractor, took the law in their own hands, and seized on the government property." A large amount of government funds had been received on Saturday.

Latestâ€”To-day's mail brings us many columns of particulars, such as they are, contradictory and unreliable generally. We will endeavor to sift the wheat from the chaff.

The outbreak has been most effectually put down, and most of its leaders killed and wounded.

The living will of course be hanged, except three who are said to have escaped, and even they may be caught, and will be if the power of the general government can be effectual to that end.

A despatch dated Tuesday morning says, The troop have entered the town. The in-surgents are willing to surrender, but only on terms of safe conduct out of difficulty. If this is not granted them they threaten a sacrifice of lives.

Lewis Washington and Col. Daingerfield are held prisoners by them.

Capt. Aaron Stephens, of Connecticut, is now dying from his wounds, and making a confession. He says the plan of operations has been concocting for a year or more. The parties rendezvoused at a farm near the town, hired for the purpose by Capt. Brown, of Kansas notoriety, under the name of â€œBill Smith.â€ Among the insurgents are Kagg Seaman, Brown, of Ohio, and Todd of Maine.

The battle was fought mainly by the railroad and tonage men from Martinsburg, led on by Capt. Albertus.

Evan Dorsey, Conductor, is killed, and conductors Bowman and Hollet, wounded. No damage has, been done to the railroad or bridge.

The rioters had the following persons prisoners, viz: Amistead Ball, draughtsman at the Armory, Benjamin Mills, master at do., John P. Dainger-field, Pay Clerk, Lewis Washington, farmer, and a prominent citizen, John Allstadt, farmer, and his son 16 years old. The three last were seized on their farms, several miles from the Ferry.

George Turner, a graduate of West Point, and one of the most distinguished citizens of this vicinity, was shot yesterday whilst coming into town, and died during the night.

Three of the rioters are lying dead in the streetâ€”three lying dead in the river, and several are said to be lying in the Armory enclosure.
List of Killed among the Citizens and Soldiers, as far as ascertained.â€” Fountain Beckham, Haywood, a negro porter at the railroad station, Jos. Burnley, of Harper's Ferry, Evan Dorsey and Geo. Richardson, of Martinsburg.

Another rioter named Lewis Leery, has just died. He confessed to the particulars of the plot, which he says was concocted by Brown, at the Fair held in Ohio, two months ago.

The rioters have just sent in a flag of truce. If they are not protected by the soldiers here, they will certainly be hanged.
A later despatch says:
â€œThe Armory has just been stormed and taken, after a determined resistence. Col. Shutt approached it with a flag of truce, and demanded its surrender. After parleying some time his demand was refused. The Marines then advanced to the charge, and endeavored to break down the doors with sledge hammers but it resisted all their efforts. A. large ladder was then used as a battering ram, and the door gave way. The rioters fired briskly. They shot three of the Marines, and their fire was returned through the partly broken door.The Marines then forced their way through the breach and in a few minutes all resistance was at an end and, the rioters were brought out amidst the most intense excitement. Many of the armed militia are trying to get an opportunity to shoot them.

Capt. Brown and his son are both shot. The latter is dead, the former is dying. He is now lying in the Armory enclosure, and talking freely. He says that he is â€œOld Ossawattamie Brown,â€ whose feats in Kansas have had such wide notoriety. He says further that his whole object was to free the slaves, and justifies his action- that he has entire possession of the town, and could have murdered all the people, but did not, and now he has been murdered in return.

Anderson (another leader) has also been shot down in the assault. He was from Connecticut.

Brown says that there were none engaged in the plot but those accompanying him. The prisoners are now retained in custody within the armory enclosure.

Harperâ€™s Ferry, Oct. 18-Noon. â€“ Soon after the storming of the Armory, the bodies of the four insurgents who were shot last evening, were found within the enclosure.

Capt. Brown and son are only dangerously wounded.

The only two of the insurrectionists who are unwounded, are Edwin Coppick, white of Iowa, and Shields Green, colored, also of Iowa. The party originally consisted of 22 persons, of who 15 have been killed, 2 mortally wounded, and 2 unhurt- 3 of them went off with the slaves on Monday morning.

Washington, Oct. 18.- Secretary Floyd received a despatch this morning from Col. Lee, dated at 7 oâ€™clock, saying that he called upon the rioters who had barricaded an engine house and the Arsenal Grounds, to surrender, promising to protect them until the wishes of the President were ascertained. The proposition was made in order to save the lives of the prisoners who were in the possession of the insurgents. The message was sent through Lieut. Stewart. The insurgents declined the proposition.

At a preconcerted signal from Lieut. Green, a detachment of Marines forcibly broke into the engine house, killing two of the rioters, and capturing the remainder. Two of the Marines were wounded, one mortally.

Ossawatomie Brown is mortally wounded. Several officers of the Arsenal and the other prisoners escaped unhurt.

Washington, Oct. 18.- Six companies of the Virginia military arrived here this afternoon, but found orders awaiting them to return.

The Alexandria Rifles accompanied the Greyâ€™s and Company F to the Ferry this morning.

Baltimore, Oct. 18.- The train is now getting ready to convey horses and men from here to pursue the rioters into any state or locality to which they have fled. This is done by order of the President, and at the request of Governor Wise.

Three Artillery companies from Fortress Monroe arrived here this morning, and are quartered at Fort McHenry, waiting for further orders.

Washington, Oct. 18.- District Attorney Ould preceeded to Harperâ€™s Ferry this evening, with the requisite Federal authorities to try the prisoners.

Tuesday Eveningâ€™s Washington City Star says-
â€œThat plunder was one of their main objects is evident in the fact that ere the neighboring militia came down on them yesterday, they robbed the Government (Arsenal) chest there of all it contained, possibly somewhere between $16,000 and $20,000 in specie, which they immediately sent off in two wagons they pressed into their service at the same time. These wagons were companied by a guard of their party, and have doubtless been overtaken and their contents retaken ere this.

A Question of Jurisdiction, -It is said that the Harperâ€™s Ferry case is the first of the kind which has ever occurred in this country, involving both State and Federal jurisdiction. While the State is affected as to slavery and locality, the General Government is interested with regard to the public property, it having control over the Arsenal grounds independent of the State, also with regard to the mails. Already in distinguished quarters the question of jurisdiction is discussed, as Gov. Wise will, it is said, claim the prisoners now held by the United States troops to be dealt with according to the laws of Virginia. In this case the question of jurisdiction will have to be decided by Judiciary.

LATEST. Washington City, Oct. 19th, 1859. All is quiet. Old Brown is still living. He had one son killed and another wounded. The original number of insurgents consisted of only twenty-two-fifteen of who were killed and two wounded-three left on Monday with a body of slaves for Pennsylvania.
There were only three or four persons taken.

There was probably not at any time more than one hundred insurgents, most of whom were slaves, who joined them on compulsion.

All the military have been disbanded except the Marines, who remain at the Ferry as a guard. 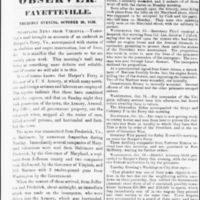