Fort Anderson was hardly the most impressive fortification erected during the Civil War, but it was not meant to stand alone. Observe it in its complexity. It guards the Cape Fear River with an array of batteries and protects the overland route from Smithville to Wilmington with an extended line of defensive fortifications and rifle pits. Keep in mind that some of the forts that defended the Cape Fear River were much larger than Fort Anderson, such as Fort Fisher. However, both forts, despite discrepancies in size, were integral parts of a very complete and comprehensive defense of something that was obviously of great importance to the Confederacy. To put Fort Anderson into context there has been included a replicated map of the of the Confederacy's Cape Fear River defenses in their entirety. One can appreciate the magnitude of the network of fortifications. In light of such proper defenses, it is irresponsible for anyone to proclaim that the Confederate States of America shirked their responsibility to defend North Carolina. The state, and especially its port, Wilmington, was too important to let fall into the hands of the enemy or become inoperable as a place of international economic exchange. 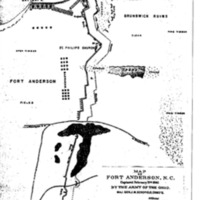 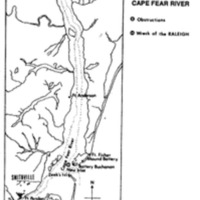