This letter was written by three citizens of New Bern, North Carolina, about the sentiment between North Carolinians and Virginia. One of the authors, Nathan Street, was a member of the House of Commons from Craven County and a member of State Senate. The letter details a very close relationship, where they express North Carolina and Virginia should react in a similar manner to an event, even if it occurs in Virginia. The authors warn of the impending dangers and the need for military preparation. They continue to discuss the close relationship between Virginia, south Carolina and North Carolina. This letter, written almost 10 months before John Brown's raid, show early support for Virginia in North Carolina, specifically New Bern. 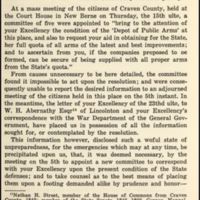