David Brown, "Attacking Slavery from Within" (2004)

David Brown, "Attacking Slavery from Within" (2004)

David Brown’s, “Attacking Slavery from Within: The Making of The Impending Crisis of the South” explores the life and writings of Republican abolitionist Hinton Rowan Helper. Helper, a native North Carolinian, published in 1857 the anti-slavery text, The Impending Crisis of the South, which analyzed the harmful effects of slavery on the economic, political, and social lives of the non-slaveholding white population within the South. Helper’s writings helped him earn notoriety and respect among Northern abolitionist circles, however, his analysis of slavery made him a despised figure throughout the slaveholding South. Brown attempts to shed new light on the motivations behind Helper’s writing and employ’s The Impending Crisis as a lens for understanding the mind set of many Southern Republicans prior to secession and the Civil War. Brown asserts that while Helper questioned the morality of slavery and supported the abolition of the institution, he did not believe in the absorption of the freed African American population into Southern society. Instead, Helper advocated sending former slaves back to Africa; a movement that Brown acknowledges had lost popularity among Northern abolitionists by the 1850s but was still prevalent among upper South Republicans.

Brown explains that Hinton Helper’s work on The Impending Crisis was inspired by numerous people and life events. The experiences of Benjamin Hedrick, a fellow North Carolinian of similar political persuasion, greatly impacted the course of Helper’s writing. Helper and Hedrick discussed their similar views regarding slavery and its impact on Southerners through numerous letters. Both men believed that slavery negatively impacted basic democratic principles, including free speech. Brown reveals that portions of Hedrick’s written defense originally published in the North Carolina Standard were inserted in Helper’s The Impending Crisis. Additionally, Helper selected abstracts of Hedrick’s letters and sent them to the New York Herald for publication with hopes that Hedrick’s experience would encourage Republicans to vote in the upcoming presidential elections.

Just weeks after the incident in Baltimore, a fellow North Carolinian was also attacked for his abolitionist stance. Benjamin Sherwood Hedrick, born and raised near Salisbury, was dismissed from his fac ulty post at the University of North Carolina for publicly supporting Fremont in the 1856 presidential election.59 In a widely published defense of his actions, parts of which were reprinted in The Impending Crisis, Hedrick argued that slavery was detrimental to the interests of ordinary southerners and lamented the fact that "neighbors, friends, and kindred" had left the piedmont, "knowing, as they did, that free and slave labor could not both exist and prosper in the same community." Moreover, he maintained, "the majority of the people among whom I was born and educated" opposed slavery. This last sentence is of most importance. Shortly before Hedrick was forced to leave North Carolina, Helper sent a letter of support: "Bravo! You are right. Stand firm, and friends will gather around you. I have not the pleasure of your acquaintance, but it would do me good to take you by the hand and tell you how glad I was to find that my dear old native state has at least one fearless patriot within her borders." Helper's next sentence echoed Hedrick's remark: "There are tens of thousands of men in the state, who entertain views similar to those expressed in your letter, but they dare not open their mouths. A remarkably free country!" Hedrick's reply described how he had recently escaped from the clutches of a mob in Salisbury in the aftermath of his dismissal, further emphasizing the violent suppression of dissent. His letter ended somewhat propheti cally by urging Helper "As a native North Carolinian ... to give the timorous of the North a correct understanding of the case as regards the South," even though at that stage Hedrick was not aware that Helper was writing The Impending Crisis. Immediately after receiving Hedrick's letter, Helper took selected extracts and delivered them to the New York Herald, and they were subsequently published on November 1, 1856, under the heading "Southern Politics." Helper hoped this did not breach any confidence between the two, but he believed that publicizing Hedrick's plight "may be the means of stimulating a number of 'timorous' northerners to a proper performance of their duty." He expressed his fear that the Republicans would be defeated at the polls in the upcoming presiden tial election of 1856 but was optimistic that they would prevail in 1860. "The principles involved in this party will, if properly studied, com mend themselves to every honest man in the country," he wrote. This exchange of letters came at a critical point in the writing of The Impending Crisis. Correspondence with Hedrick must have reassured Helper that his arguments were important and that they would find a receptive audience. Hedrick virtually invited his fellow North Carolinian to finish the book, and phrases such as "a correct understanding" and "timorous of the North" encouraged Helper to emphasize his iconoclastic viewpoint. Hedrick's treatment confirmed what Helper had already experienced--that free speech on the slavery issue within the South was not only denied but could potentially result in violence--and it made him even more determined to be heard. These letters also reveal the depth of Helper's identification with and faith in the Republican Party. His desperate attempt to gather further support for the Republicans on the eve of polling in the 1856 presidential election illustrated his commitment to the cause. Moreover, his suggestion that "every honest man in the country" might be converted if they were only presented with the party's principles defined his own understanding of the ultimate purpose of his manuscript. 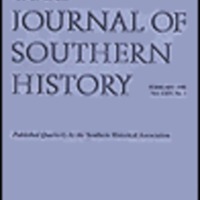