This is an article from the North Carolina Daily Conservative newspaper edited by Governor Zebulon Baird Vance's and dated June 8, 1864. In this article, the Conservative attacks Vance's gubernatorial political opponant William B. Holden in one of many slandering attacks througout Vance's 1864 reelection campaign. This article displays the propaganda machine that Vance built in order to sway voters away from Holden's peace campaigns to instead support perpetuating the Confederacy.

According to the Progress, the mere denint - the ipse dixit -- of Mr. Holden should have "as much weight with the masses of the people in North Carolina as that of Gov. Vance, Mr. Hampton, or others." So what Mr. Holden may say should be regarded as law and gospel, although all the world should testify against him. According to this, Mr. Holden may commit any crime, however heinous, and if he simply denies it, that is all that is necessary, in the opinion of the Progress, to exulpate him. Whatever might be the verdict of a jury, or the judgement of the court, it would matter not, so the defendant, W. W. Holden, Should put in the plea, not guilty.

It is a maxim of the common law, that no man shall be a witness in his own case. But the Progress would throw this maxim to the dogs, and allow Mr. Holden to give evidence in his own case. But this will not be allowed - the law and the testimony are against him, and he stands before his country men convicted of the great crime of having projected a movement to withdraw North Carolina from the Confederate allies -- to take her own affairs in her own hands -- and thus add a civil war in North Carolina to that which already exists between us and the United States. 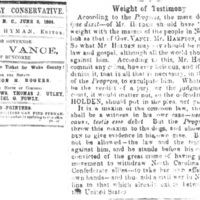