In this article, the local Republican government asserted its loyalty to the government of the United States and laid out its Reconstruction goals to restore prosperity within the nation. In nine precise clauses, these Republicans wholeheartedly supported Reconstruction in the American South, claiming treason among its many dissenters. Claims made within the document displayed unwavering support for minorities--especially freedmen--as well as condemnation for radical southern Democrats, who the authors believed to be "a majority of leading men more disloyal than during the rebellion, if possible." The article proved the drastic separation among white political elites in North Carolina while it also countered the widespread belief that most southerners felt betrayed and rendered useless by Union occupation during and following the war.

..in support of the Republican party, urging the necessity of unity in the Republican ranks, when the committee returned and reported through their Chairman, C. Younce the following preamble and resolutions which were unanimously adopted: Whereas, we as a loyal body, and ever have been, were opposed to the rebellion and dissolution of this once glorious and happy government, and always looking upon treason as the most villainous and infamous of all crimes; that we held and still hold that the government of the United States is, and ever has been our best and surest protector and supporter, and as we were and are still denounced as tories and traitors to our country by rebels; therefore, be it
1. Resolved, that as a loyal and law-abiding people we are not willing that any man who engaged in the rebellion voluntarily should rule over us or have any hand in rebuilding the government of the United States or of this State. 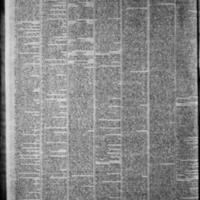