This article, given from a Democratic perspective, identified the sectional crisis in North Carolina and surrounding southern states and attempted to summarize the general resistance among white men to fully accept blacks as equals in political and social contexts.  Though the document refuted the belief that most southerners resented Reconstruction because of their social and economic dependence on slavery, it did capture the emotional resentment felt by most white North Carolinians. Rather than truly identifying with the plight of racial assimilation, the article claimed that the rapid induction of African Americans into political and judicial positions only hurt the goals of Reconstruction and blacks who sought equality. The newspaper's introduction generalized the ideologies of the white majority who refused to be governed by an "ignorant, irresponsible multitude" of minority political figures.  Despite its pledge to the goals of Reconstruction, the article demonstrated their perception of most surrounding whites' feelings toward Reconstruction in November 1867, only two short years following the war's end.

We have favored the holding of a Convention as authorized by Congress, and of doing all that could fairly and honorably be done to effect reconstruction and restore the State to civil government, but we can plainly see that almost a death-blow has been given the movement by many of those who profess to be its peculiar friends, and that the great mass of the white people are being aggravated or forced in opposition by the election of negro delegates to the Conventions, the appointment of negroes to public offices, and the forcing of negroes on the Juries by military orders. With these occurrences staring the white people in the face, we think we might as well dart straws against the wind as to advise them to go forward and endorse the reconstruction measures of Congress. The white people of the South (as well as of the North) do not intend to voluntarily consent to be governed by the colored people, and every time a colored man is put on the Jury or into any office, the cause of reconstruction and the negro himself is injured. Those who push negroes forward in that way not only obstruct reconstruction, but actually do the negro much harm and cause opposition to him from those who would be kindly dipposcd if he were to remain in his proper sphere. There are but few white men who are not at heart opposed to universal negro suffrage, and we do not believe that any large number will ever endorse it. Qualified suffrage might secure a majority, and a settlement of the questions at issue effected, but we are satisfied that the whites will never consent to put themselves and their property at the mercy of an ignorant, irresponsible multitude. 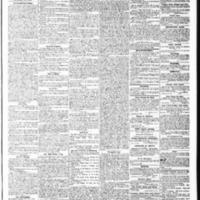