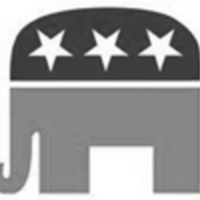 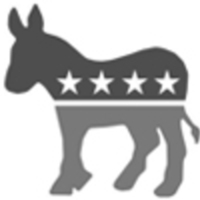 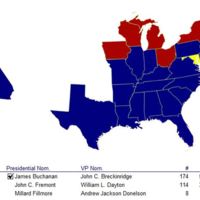 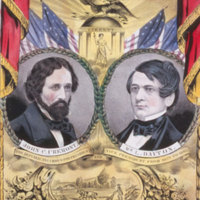 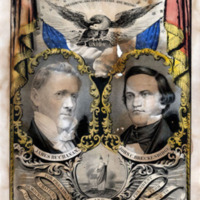 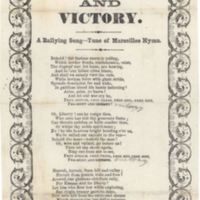 The year 1856 proved to be special as the newly formed Republican Party joined the political stage in response to the events surrounding the 1854 Kansas-Nebraska Act. As the Republican Party gained a national foothold, the Whig Party’s influence waned. With the 1856 Presidential election the nation gained an openly abolitionist-based political party, although the Republican Party did not call for an absolute abolition of slavery. Republicans opposed slavery’s expansion into the western territories.  Republican Party members, comprised largely of former Whigs and Democrats, claimed in their June 18, 1856 party platform,

This Convention of Delegates, assembled in pursuance of a call addressed to the people of the United States, without regard to past political differences or divisions, who are opposed to the repeal of the Missouri Compromise; to the policy of the present Administration; to the extension of Slavery into Free Territory; in favor of the admission of Kansas as a Free State; of restoring the action of the Federal Government to the principles of Washington and Jefferson; and for the purpose of presenting candidates for the offices of President and Vice-President. (Item #285)

The Republicans nominated John C. Fremont, a popular figure who gained his fame through his explorations through the far West. (Item #631) Popular culture of the period emphasized Fremont’s notoriety as an explorer and claimed that this made him the right man to be President of the United States. In the nineteenth century, political arena music and songs were a popular method for reaching wider, often illiterate, audiences. A popular song. “Fremont and Victory: A Rallying Song--Tune of Marseilles Hymn,” exclaimed,

Around our glorious chieftain rally,
For Kansas and for liberty!
Let him who first her wilds exploring,
Her virgin beauty gave to fame,
Now save her from the curse and shame
Which slavery o'er her soil is pouring.

The Democrats nominated James Buchanan for President and, predictably, devised a platform that included, “the standard party dogma on the tariff, internal improvements, banking, and the currency.” (Item #632; Niven 1990, 98) Additionally, their platform supported the Kansas-Nebraska Act and argued that,

That Congress has no power under the Constitution, to interfere with or control the domestic institutions of the several States, and that such States are the sole and proper judges of everything appertaining to their own affairs, not prohibited by the Constitution; that all efforts of the abolitionists, or others, made to induce Congress to interfere with questions of slavery, or to take incipient steps in relation thereto, are calculated to lead to the most alarming and dangerous consequences; and that all such efforts have an inevitable tendency to diminish the happiness of the people and endanger the stability and permanency of the Union, and ought not to be countenanced by any friend of our political institutions. (Item # 286)

The Democrats became the pro-slavery party of the South, while the abolitionist Republican Party came to represent the political tendencies of the majority of citizens in the North. This fact can be observed in the way the two regions voted in the 1856 presidential election. The margin of victory for the Democrats was quite narrow and “Buchanan received only a plurality of the votes cast…Obviously threats of secession from southern states if Fremont were elected had frightened a considerable number of conservative northern voters.” (Niven 1990, 98) The Republicans won eleven of the sixteen Free States, while in the five that went Democratic, Fremont lost by only a narrow margin. Buchanan only won the election because his electoral vote in the South was larger than Fremont’s in the North. (Item #630) The election of 1856 signaled the end of an era, going forward, “sectional loyalties rather than party ties would determine the fate of the Union.” (Niven 1990, 99)

In North Carolina the presence of the overtly anti-slavery Republican Party in presidential campaign of 1856 caused concern. Members of both the Democratic and dwindling Whig Party, “agreed that the election of John C. Fremont would be a blow to the southern institutions and a threat to the Union.” (Jeffrey 1989, 300) Instead of uniting together against this shared threat, each party supported a different presidential candidate. Democrats argued that Buchanan was the only candidate who truly understood their needs and the needs of the nation. Whigs denounced Buchanan as the candidate of southern extremists and instead supported the American Party candidate Millard Fillmore, who they argued represented the values of a united country. In the end Democrats celebrated the victory of their candidate in both North Carolina and the nation, however, “their enthusiasm was dampened by the realization that Fremont had outpolled Buchanan in most of the northern states.” (Jeffrey 1989, 300) The thought of a Republican President in the White House stirred fear among all southerners and led to discussions of secession throughout the South in the event that such an outrage ever occurred. The next section of the exhibit will explore the consequences University of North Carolina professor, Benjamin Hedrick, faced for his open support of John C. Fremont.

← A Nation Divided: The Political Climate of 1850s America
The Hedrick Ordeal →
The 1856 Presidential Election