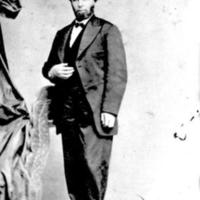 “We cannot become parties to the subjugation of our Southern brethren. The federal government cannot be maintained by force applied to sovereign States. Local combinations and insurrections may be put down by force, and should be; but to attempt to drive and subdue sovereign States by armies is to exercise unjust, undelegated, arbitrary power.” (Item 279) These words written by the North Carolina Standard only one month before the state’s secession show the tension building toward not only the South, but the North as well. With the rise of a Confederate nation, North Carolinians forecasted military action. To defend itself from the Union, the Confederates would have to mobilize a large army. With the threat of war spreading throughout the South, martial law would most likely be imposed to contain not only hostile southern unionists, but also a restless enslaved population. As free Americans who believed in the rights given to them by the Constitution, North Carolinians faced a choice. The North Carolina Standard wrote “There is only one evil greater than disunion, and that is the loss of honor and Constitutional right. That evil the people of the South will never submit to.” (Item 276)

Once the war broke out in April 1861, an editorial written by the North Carolina Standard suggested that forcible action be taken against both sides. While they did not believe that the Union was fully guilty of causing the war, North Carolinians began to feel that Lincoln might have been exercising unconstitutional governmental and militaristic powers. While still desiring peace and not wanting to side with the Confederacy, the citizens began to think that the Upper South might try and unite to bring peace, democratically or forcefully. The citizens of North Carolina, while still wishing a compromise with the Union, were now considering other possible options to force peace between the Union and the Confederacy, even possibly, in the most extreme case, establishing a new government if the old one should fall. (Item 279)

Compromise with the Union eventually lost to a Confederate government that forced its will upon the people. The despotic government that North Carolinians had been warned about for so long, on May 20, 1861, imposed its will against the wishes of the people of the state of North Carolina. Michael K. Honey discusses the events that led up to the state’s secession in his essay entitled “The War Within the Confederacy: White Unionist of North Carolina.” Honey emphasized that most North Carolinians were against seceding with the Confederates and that North Carolina had the largest pro-Union support in the Confederacy. However, slaveholders whose interests lay with the Confederacy maintained a majority representation in local government, even though they were only a small percentage of the population. About a year before the beginning of the Civil War, the non-slaveholding class almost successfully overthrew the aristocratic slaveholders in gaining control of the state in what became known as the taxation campaign. This campaign ultimately failed because of the overwhelming majority of slaveholding elite in the legislature. (Honey 1986, 75-93)

With the taxation movement in 1860 and the successful popular referendum against leaving the Union right before the onset of the Civil War, Confederate leaders had no faith in North Carolinians because they felt that the majority of the people’s loyalty remained with the Union. The state government, at the peak of its military despotism, made laws against supporting efforts of the Union and the Constitution. Finally, on May 20, 1861, the North Carolina legislature delegates seceded from the United States without the support and ratification of the citizens. During the war, Governor Zebulon Vance even admitted to the state government’s tyranny when he said, “the great popular heart is not now and never has been in this war. It was a revolution of the politicians, not the people.” (Honey 1986, 75-93) The people of North Carolina were victims in a war in which they did not want to take part.