This article, from an 1865 edition of The New York Times, recounts the Second Battle of Fort Fisher and the resulting Union capture of the fort. Protecting the Confederate port in Wilmington, Fort Fisher was a crucial Confederate supply port. The Second Battle of Fort Fisher, beginning on January 13, 1865 and ending on January 15, 1865 was a joint operation carried out by Union Army and Naval forces commanded by Major General Alfred Terry and Admiral David Porter against Confederate troops under the command of Major General William Whiting, Major General Robert Hoke, and General Braxton Bragg. The Second Battle of Fort Fisher resulted in the Union capture of the fort. This article includes descriptions of troop movements, estimated casualties and prisoners taken, an official report of the battle from Admiral Porter, a Confederate account of the battle taken from the Richmond Whig, and an official dispatch about the battle from Confederate General Robert E. Lee.

The following official dispatches have just been received at this department:

GENERAL: I have the honor to report that Fort Fisher was carried by assault, this afternoon and evening, by Gen. AMES' division and the Second Brigade of the First Division of the Twenty-fourth Army Corps, gallantly sided by a battalion of marines and seamen from the navy. The assault was preceded by a heavy bombardment from the Federal fleet, and was made at 3:30 P.M., when the First Brigade -- CURTISS', of AMES' division-effected a lodgment upon the parapet, but full possession of the work was not obtained until 10 P.M. The behavior of both officers and men was most admirable. All the works south of Fort Fisher are now occupied by our troops. We have not less than 1,200 prisoners, including Gen. WHITING and Col. LAMB, the Commandant of the fort. I regret to say that our loss is severe, especially in officers. I am not yet able to form any estimate of the number of casualties. (Signed,) ALFRED H. TERRY,

FORT FISHER, Monday, Jan. 16 -- 2 o'clock A.M. After a careful reconnaissance on the 14th it was decided to risk an assault on Fort Fisher. PAINE's division with Col. ABBOTT's brigade to hold our line, already strong, across the peninsula, and facing Wilmington against HOKE, while AMES' division should assault on the west end. After three hours of heavy navy firing, the assault was made at 3 P.M. on the 15th. CURTIS' Brigade led, and as soon as it had made a lodgment on the west end of the land front it was followed by PENNYBACKER's and the latter by BELL's. After desperate fighting, gaining foot by foot, and severe loss, by 5 P.M., we had possession of about half the land front. ABBOTT's Brigade was then taken from our line facing Wilmington, and put into Fort Fisher, and on pushing it forward, at 10 P.M., it took the rest of the work with little resistance -- the garrison falling back to the extreme of the peninsula, where they were followed and captured, among others Gen. WHITING and Col. LAMB, both wounded. I think we have quite 1,000 prisoners. I hope our own loss may not exceed 500; but it is impossible to judge in the night. Among the wounded are the Commanders of the three leading brigades; Gen. CURTISS being wounded, not severely; but Cols. PENNYBACKER and BELL dangerously. The land front was a formidable one, the parapet in places, fourteen or fifteen feet high; but the men went at it nobly, under a severe musketry fire. The marines and sailors went up gallantly; but the musketry fire from the east end of the land front was so severe that they did not succeed in entering the work. The navy fire on the work, judging from the holes, must have been terrific. Many of the guns were injured, How many there were on the point I cannot say, perhaps thirty or forty.

Gen. GRANT telegraphed to his department that in honor of this great triumph, achieved by the united valor of the army and navy, he has ordered a salute of one hundred guns to be fired by each of the armies operating against Richmond.

The Atlantic is just in from Wilmington.

Fort Fisher and the works on Federal Point are in our possession.

The assault was made by the army and sailors on Sunday afternoon, and by 11 P.M. the works were ours.

The losses are heavy.

Lieuts. S.W. PRESTON and B.H. PORTER, of the navy, are killed.

Gens. WHITING and LAMB, (rebels) are prisoners and wounded.

The Vanderbilt is on her way North with dispatches.

The Richmond Whig of this morning contains the following account of the capture of Fort Fisher, by the naval and land forces of the United States:

The unwelcome news of the fall of Fort Fisher, commanding the entrance to Cape Fear River, was made this morning, and occasioned a sensation of profound regret. The capture of this fort is equivalent to the closure of the harbor of Wilmington by the enemy's fleet. It is situated about eighteen miles below the city, but was the main defense of the entrance to the river, and its fall, therefore, will prevent in future the arrival and departure of Blockade-runners. How far this reverse may prove injurious to our cause remains to be seen, but at present we regard it rather an unfortunate than a disastrous event. The following is the official report:

At 4 P.M. their infantry advanced to the assault, a heavy demonstration at the same hour being made against their rear by our troops.

A 6:30 P.M. Gen. WHITING reports that their attack had failed, and the garrison was being strengthened with fresh troops.

At about 10 P.M. the fort was captured with most of the garrison.

No further particulars at this time known.

No dispatches have been received from Gen. TERRY since that of Sunday night announcing the result of the assault. C.A. DANA, 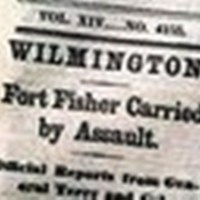