Consquence and Attitude Towards Desertion 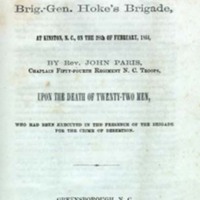 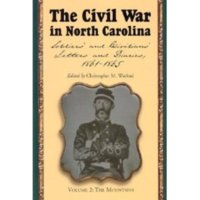 order to understand the magnitude of desperation Confederate soldiers in Western North Carolina felt before making the tough decision to desert, an examination of attitudes against desertion, as well as the consequence these men would bear if caught, is necessary. A sermon given by the Reverend John Parris in the winter of 1864 gives insight to the disgust many felt for those that chosen to abandon their post in the military. Fifty individuals had been caught, 22 of whom were recognized as former Confederate soldiers.[1] These men were later tried for treason and desertion, and sentenced to death by hanging, after which the following message was given. The Reverend makes it clear that the sermon he gave was intended for those that had just passed away, but should be seen as beneficial solely for the living.[2]

The biblical character Judas who deceived Christ is described by Parris as the most notable deserter in the history of the world, and he then proceeds to compare these 22 individuals caught for treason to this despicable man. In describing Judas, Parris says “His object is selfish, base and sorid… What did he lose? His reputation…peace of conscience, his life, his soul, his all”. [3]The Reverend continues in his rant against those who have deserted with another comparison to Benedict Arnold who was tried for treason and desertion, which in his eyes, was considered perjury before both God and man.[4] The sermon states that if one had taken up arms for his country, and later deserted, you were most definitely in the company of Judas and Benedict alike.[5] The hatred Parris feels for these individuals is felt in his statement that his vocabulary wasn’t broad enough to come up with a word to describe the disgust he has for a deserter, and if his own brother chose to do so, he would see to it that his name was changed so as to not have to associate with such a person.[6]

Reverend Parris’ sermon is wrapped up in saying that few crimes in the eyes of God are more detestable than desertion from your country, and that only a true Christian is also a true patriot.[7] It’s clear in this heavy lecture that the negative attitude towards those that desert was well known and immense. With the knowledge that individuals such as your own Reverend would have despised you for the decision to escape home, it’s clear that Confederate soldiers in Western North Carolina were distraught, and desperate to return home. In a letter to his sister, Private William H. Proffit describes his feelings his comrades that chose to desert the army. “And as regards to deserters, I would as soon hear of a Christian friend of mine being shot through the brain or heart as to hear of him deserting the army and resorting to the rock houses of his native mountains.”[8] For one’s own comrades to have such strong hate and disapproval for the act of desertion, to do so was a direct correlation to the negative mental and physical effects placed upon Confederate soldiers.

After assessing the magnitude of need on the home front, one’s allegiance to the Confederate cause, the physical and mental state your body was in, as well as the negative attitudes on desertion from those around you, a Confederate soldier serving in the mountains of North Carolina was also faced with the possible punishments that were surely to be given should he be caught. As stated in Reverend Parris’ sermon account, hanging was a common form of punishment that would be administered to those who were caught and found guilty of desertion/treason, however, whippings and firing squads were widespread methods of retribution. In a very heartrending final letter to his wife, Private Job R. Redmond of the 65th Regiment NC Troops in Buncombe County sends his love before he is to be shot the next morning:

“My deir wife and children, I seate my self this morning with a troub beld harte and a de strest mind to try to rite a few lines to let you no that I hierd my sentens red yesterday and hit was very Bad. I am very sory to let you no all read dy I hafte to bee shot the 9 of this month… My dier wife I think I could die better sadesfide if I could see you and the children one more time on erth and talk wit you but my time is so short I donte exspect to ever see you and my dier little children eny more on erth.” [9]

Redmond continues, asking his wife to protect his children, and tells her again and again how sorry he is, and how much he loves her.[10] It’s evident that this man felt the drive to return to his family in their time of need, and as penalty for his actions, was forced to leave them permanently. The 25th Troops of North Carolina recall a similar unpleasant tale where a man was caught leaving only for the night to visit his wife and children, and had planned on returning the next day.[11] His original punishment was to be shot on the spot; however, another General decides that placing him on the front lines would serve to be more beneficial.[12] As intended, this soldier was tragically killed the very next day in battle.[13] The threat of death was indeed enough to hold some Confederate men back from desertion; however, the vast amount of men that deserted still makes it clear that risking death was worth the chance of getting home and away from the terrors of war.

[1] Parris, John. A Sermon: Preached before Brig.-Gen. Hoke's Brigade, at Kinston, N. C., on the 28th of February, 1864, by Rev. John Paris, Chaplain Fifty-Fourth Regiment N. C. Troops, upon the Death of Twenty-Two Men, Who Had Been Executed in the Presence of the Brigade for the Crime of Desertion. North Carolina, Kinston. 28 June 1864.