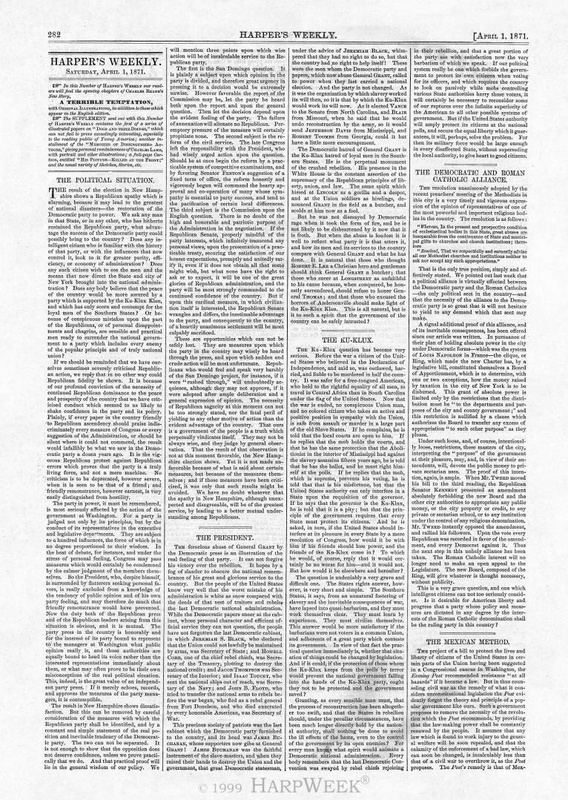 The Ku Klux Klan, often referred to as the Klan, was a white supremacist group that was well known for its violence against African Americans and white Republicans during Reconstruction.  The Klan was an extreme supporter of the Democratic Party, which was not in power during Reconstruction.  The Ku Klux Klan operated throughout the South, including North Carolina.  Alamance and Caswell counties were well known for their Klan violence.  During the time that the Klan perpetrated intense violence in these counties, Holden was the governor of North Carolina.  Governor Holden made it his mission to oust the Klan from Alamance and Caswell counties, which meant that government intervention was necessary to rid these counties and the South of such hate groups.

Six young men created the Ku Klux Klan, when it originated in Pulaski, Tennessee.  These six men were Confederate army veterans, and they had been raised in families of prominence in society.  As African Americans began to enjoy more freedom in Southern society, the Klan felt that they had a duty to restore order, which led Klan members to feel that they should become “vigilantes” for society.  Historian Allen Trelease states, “they formed their societies both as political organizations to intimidate Republican voters and as regulative bodies to deter or punish Negro criminals.” (Trelease 1971, 199) As “vigilantes,” the Ku Klux Klan relied on threats and fear to subdue their victims, and they felt that they had an obligation to protect certain citizens of society like white women and Democratic supporters.  Violence became an integral part of the societal order the Klan attempted to restore throughout the region.  Historian Stanley Horn states, “preposterous as it may seem, the Ku Klux considered themselves as something equivalent to an entire system of jurisprudence compressed into one body, combining the functions of prosecuting attorney, grand jury, trial judge, and executioner.” (Horn 1973, 46)  These “vigilantes” spread across the South in an attempt to deter the advancement of African Americans and the Republican Party. (Trelease 1971, 3-27)

The Ku Klux Klan was present in North Carolina as much as it was in any other Southern state.  Two of the most well known counties with Klan presence were Alamance and Caswell counties, both located in the northern Piedmont.  The Klan became extremely active in North Carolina during 1868, which is also the same year that Holden became governor of North Carolina.  North Carolina Klan followers held the same sentiment as most other followers of the Klan in other Southern states.  In his memoirs, Governor Holden discussed the violence in Alamance and Caswell counties.  In a letter from Governor Holden to Honor R. M. Pearson, Holden claimed “during the last twelve months, not less than one hundred persons, ‘in the peace of God and the State,’ have been taken from their homes and scourged, mainly if not entirely on account of their political opinions; that eight murders have been committed, including that of a State Senator, on the same account; that another State Senator has been compelled from fear for his life to make his escape to a distant State.”[1] (Item 994; Holden 1865, 154)  The violence that was taking place in Alamance and Caswell counties was based on political ideology.  These Klan actions called for government intervention because citizens were being terrorized based on their political party affiliation.  In a message from Governor Holden to the General Assembly, Holden again spoke of violent crimes in Alamance and Caswell counties. He stated,

“The civil law was powerless. One State Senator was murdered in the open day in a County Court-house, and another State Senator was driven from the State, solely on account of their political opinions. In neither case was a bill found by a Grand Jury. A respectable and unoffending colored man was taken from his bed at night, and hanged by the neck until he was dead, within a short distance of a County Court-house. Another colored man was drowned, because he spoke publicly of persons who aided in the commission of this crime. No bills were found in these cases. A crippled white man, a native of Vermont, was cruelly whipped because he was teaching a colored school. No bill was found in this case. The Sheriff of a County was waylaid, shot and killed on a public highway, and the Colonel of a County was shot and killed in the open day, while engaged in his usual business. A County jail was broken open, and five men taken out and their throats cut. Another jail was broken open, and men taken out and shot, one of whom died of his wound. Another jail was broken open and a United States prisoner released. No punishments followed in these cases. The members of this Klan, under the orders of their Chiefs, had ridden through many neighborhoods at night, and had punished free citizens on account of their political opinions, and had so terrified many of them by threats of future visitations of vengeance that they fled from their houses, took refuge in the woods, and did not dare to appear in public to exercise their right of suffrage.”[2] (Item 2712)

This message made clear that Klan violence was not only based on political ideology but also the fact that officials overlooked Klan violence.  The Klan targeted local citizens as well as high-ranking officials, like senators, who supported the Republican Party.  There was no legal protection for citizens who lived amongst Klan violence.

The Ku Klux Klan, as discussed, was a well-known hate group throughout the South.  They gained the attention of not only the state they haunted but also the states they did not haunt.  Most of the attention the Klan gained was from Northern states, because they did not experience the Klan in the same way Southern states did.  Harper’s Weekly was a Northern Republican newspaper, and they covered Ku Klux Klan action across the southern states.  In one article titled, “The Ku-Klux,” Harper’s Weekly discussed the violent threat that Klan members imposed upon freedmen and supporters of the Union. The article stated, “Now that the war is ended, no conspicuous Union man, and no colored citizen who takes an active and positive position in sympathy with the Union, is safe from assault or murder in a large part of the old Slave States.”[3] (Item 928)  The article criticized the power of state's rights during Reconstruction, and the "hands off" approach the federal government used in response to Klan violence. The article was concerned that the federal government would fall into the hands of the Klan. The article implied that the only way to end the influence of the Klan was for the federal government to step in and protect its citizens.