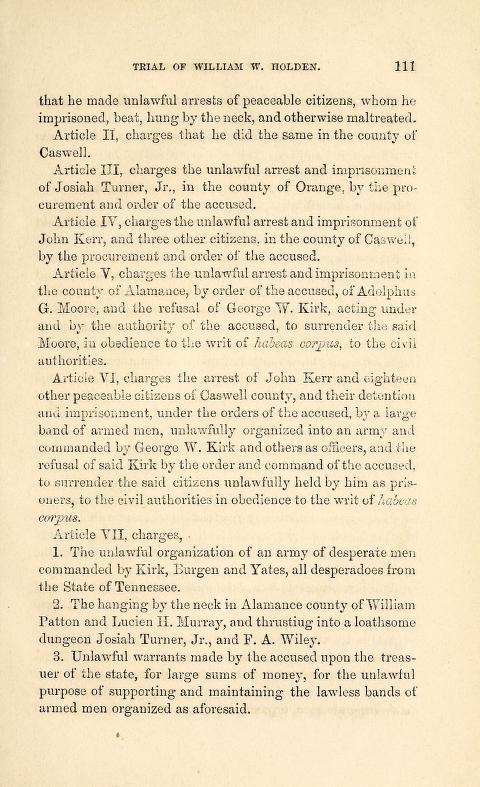 Argument in the impeachment trial of W.W. Holden, governor of North Carolina, February 23, 1871

Governor Holden was impeached as the governor of North Carolina on March 22, 1871.  Governor Holden’s impeachment signaled the downfall of the Republican Party and brought the Democratic Party back into power, which would bring a resurgence of white supremacy and terrorist violence.  There were eight charges brought against Governor Holden:

Article I. Unlawfully declaring the County of Alamance in insurrection and raising bodies of “armed, desperate and lawless men” who arrested and detained eighty-two citizens, when in fact there was no insurrection and civil authorities were in full exercise of all their functions.

Article II. Unlawfully taking the same action, in the same manner, against the County of Caswell, where eighteen men were arrested.

Article V. Unlawfully refusing to obey a writ of habeas corpus in the case of Adolphus G. Moore of Alamance County.

Article VI. Unlawfully refusing to obey writ of habeas corpus in the case of nineteen citizens arrested in Caswell County.

Article VII. Unlawfully recruiting and arming five hundred men and more, “many of them most reckless, desperate, reffianly and lawless characters,” and placing them under the command of George W. Kirk, “a notorious desperado”; unlawfully arresting and imprisoning many men; hanging by the neck William Patton, Lucien H. Murry, and others; thrusting Josiah Turner into a “loathsome dungeon”; and illegally drawing more than $70,000 from the state treasury to pay the troops.

Article VIII. Unlawfully causing the state treasurer to disregard an injunction that would have restrained him from making the money for the troop payments available.[8] (Item 2713) (Folk and Shaw 1982, 226-227)