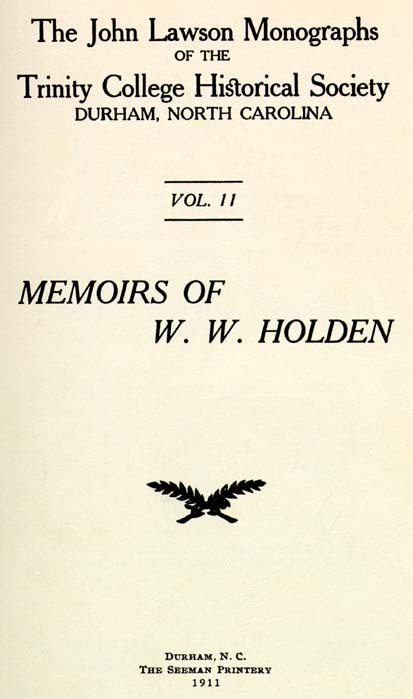 Governor William W. Holden faced enormous challenges during his administration the state was in shambles. Reorganization of local and state governments, reestablishment of public schools open to all children (African American and Caucasian), penal reform and the construction of a state penitentiary, development of a deteriorating economy by encouraging northern migration of labor and capital, expansion of railroads and other internal improvements, and obtaining equal justice for all persons. (Holden 1911, 98) Obtaining equal justice as well as equal rights, including those of African Americans is what created the greatest issue for Holden, many North Carolinians were unwilling to extend full civil rights to African Americans especially the right to vote. It lead to violence and acts of terror, which lead to the Kirk-Holden War and finally to his impeachment.

His actions and motives in the Kirk-Holden War were questioned as just moves for political gain. The Conservative party’s aim was to destroy the Republican Party and place them in the power of the state. Using the Ku Klux Klan and their white vigilantes they did just that, Holden played right into their hands. Holden suspended the writ of habeas corpus violating the suspected members of the Ku Klux Klan, who were arrested, declaring the counties of Alamance and Caswell in a state of insurrection and his unlawful arrest of Josiah Turner (Holden, 133) These were just a few of the charges brought against him. After the prisoners and members of the Ku Klux Klan were released and sent home to celebrate their victory, Holden was brought up in a court of impeachment. On 9 Dec. 1870 Frederick W. Strudwick of Orange County, a former Klan leader, introduced in the state house of representatives a resolution calling for Holden's impeachment for high crimes and misdemeanors. (Holden, 148) Holden illustrated in his memoir the contradictoriness of a former Klan leader, bringing in the resolution for his impeachment. As well as in the Address to the Colored People of North Carolina, the seventeen state representatives illustrate this as well, calling the Democratic Party corrupt as to the lengths they went to, to impeach Governor Holden. The resolution was adopted on December 14th; the house approved eight articles of impeachment against Holden. The first two alleged that he had illegally declared Alamance and Caswell counties in insurrection. The third and fourth regarded the "unlawful" arrest of Josiah Turner, Jr., as well as the Klan members without benefit of trial. The fifth and sixth accused the governor of disobeying the writ of habeas corpus; and the last two charged him with the unlawful recruitment of troops and their illegal payment from the state treasury. December 20th, 1870, Holden turned over the keys to the office to Todd R. Caldwell. His trial began on January 23rd, 1871 and on March 22nd he was found guilty of these charges, removed from his post of governor and denied the right to hold office in the state.  Holden still had the support of the Republican Party who was very aware of the corruptness of the Democratic/Conservative Party who was in association with the Klan. Holden’s motives for the actions he took in the Kirk-Holden war were not of those of political gain for himself nor his party; these actions lead to his defeat as well as the Republican Party. “I did not care how the elections of 1870 went if by what I did I saved one human life. The civil and military are alike constitutional powers; the civil to protect life and property when it can, and the military only when the former has failed.” His chief aim was to protect the citizens of North Carolina and to suppress the Klan for good, while doing so unfortunately he fell into the Democrats trap and even though he was responsible for the defeat of his party, they still supported him.

Republicans and the Ku Klux Klan in North Carolina