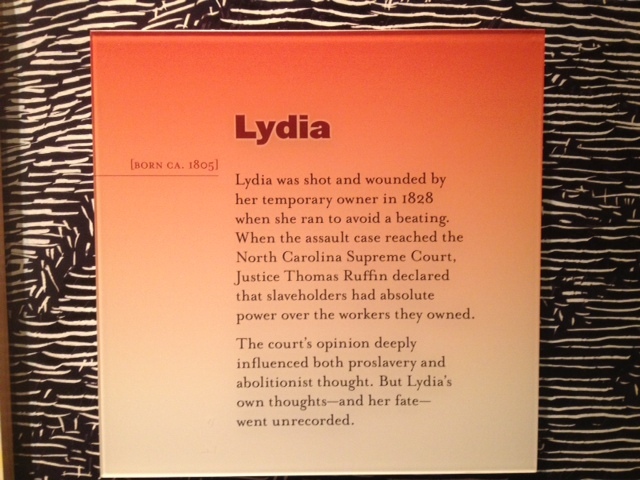 In 1830, North Carolina Supreme Court Justice Thomas Ruffin was presented with the case of The State of North Carolina v. John Mann. While the subject and details of the case were not that unusual, it was Ruffin’s ruling that made State v. Mann one of the most important slave law cases in the pre-Civil War South.

In 1828, John Mann of Chowan County, North Carolina rented a slave named Lydia from her owner Elizabeth Jones. During the year that Mann rented Lydia, he shot and injured Lydia while she was trying to escape a punishment. Mann was charged with assault and battery and fined five dollars. Judge Daniel of the Chowan County Court asked the jury to decide if the punishment inflicted by Mann was unwarrantable or disproportionate to the offence committed. The lower court of Chowan County returned a verdict of guilty, and the defendant appealed. The Attorney-General argued that there was no difference between this case and the earlier case of State v. Hall except that the weapon used was one calculated to produce death. North Carolina Supreme Court Judge Thomas Ruffin ruled in favor of the defendant on the grounds that “One who has a right to the labor of a slave, has also a right to all the means of controlling his conduct which the owner has.” Even though the slave was hired and not owned by Mann, he still possessed the power to control his slave using whatever means necessary. This decision did not interfere with the owner’s right to seek payment for damages (Item 44).

State v. Mann is considered a landmark case in slave law. Anti-slavery and pro-slavery supporters referenced this case in many arguments that followed. Ruffin’s statement within his decision that “the power of the master must be absolute to render the submission of the slave perfect” rained loudly on both pro-slavery and abolitionist supporters. This case set the precedent for other courts to allow unwarranted harm towards slaves by their owners.

While Ruffin was young, his father expressed how bad he felt for slaves and their unfortunate circumstance. After attending Princeton and earning his law degree, Ruffin moved to Hillsborough, NC where he practiced law and owned a farm. Ruffin owned slaves that worked on his farm and it was during this time that he started to shift his view of slavery as a necessary evil within society. Ruffin felt that disrupting the slave practice would cause a complete collapse of order in the southern-white way of life. This shift in feeling is evident in the wording of his decision of State v. Mann. Later in his life Ruffin began to see slavery as a good for society because it introduced blacks to Christianity and helped “civilize” them.

Ruffin’s shift in feelings of slavery can be attributed to the increase of “excitement” in the slave question throughout his life. Early on, the practice of slavery was not under any real considerable threat. Later in his life, the nation was nearing towards Civil War and it forced Ruffin to align with the pro-slavery side.

Historians such as Mark Tushnet have explored Ruffin’s wording within his decision and preceding drafts of his decision. Previous scholarship has focused a lot on how he used a wide array of words to deter responsibility from himself and how he made a judicial choice rather than fulfilled his judicial duty. This exhibit will present evidence of Ruffin’s change of feeling towards the slave practice throughout his life, including years long after State v. Mann had been decided. This comparison of his earlier and later sentiments on slavery will create a new aspect to the scholarship on Thomas Ruffin that has not been directly addressed before.