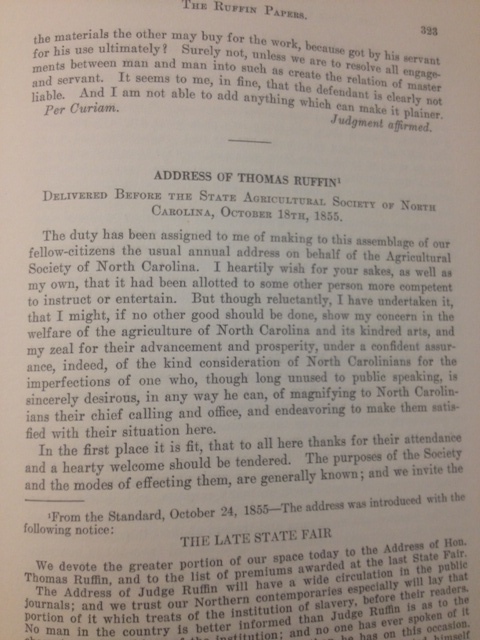 In the years after State v. Mann, Ruffin shows a change in feeling regarding the role of slavery. At the age of 67, Ruffin was elected president of the North Carolina Agricultural Society. In an address to the North Carolina Agricultural Society on October 18, 1855 Ruffin presented arguments that showed his belief that slavery is a good for society. Ruffin argued that blacks had inherited conditions by their African ancestors that allowed them to work better in harsh conditions than whites (Item 838). By saying this, he makes judgment that the African-Americans can withstand the demanding needs of slave owners based on biological differences. In regards to the black population as a whole, Ruffin says that if they were set free that they would fall under their own self destruction and cites the enfranchised blacks of the West Indies and our “native savages” who had become nearly extinct (Item 838). One thing he does not note is the role that whites played in creating a catalyst towards this misfortune.

One reason why Ruffin aligns with pro-slavery ideology more in his later life than he had earlier in his life is because of abolitionist views on slavery. He believed that abolitionist did not understand how slavery worked.

“It should be pursued by persons having no knowledge of its practical operation, under a phrensy against slavery in the abstract, fatally bent on its restriction and destruction… But I believe we need not apprehend much danger to our personal rights or political institutions… I trust, many men, of sound heads and sound hearts, who are able as we to understand and explain the constitution, and calculate the value of the union as justly.”

Ruffin felt that slaveholders were misunderstood by abolitionist and that their goal would ruin the southern way of life.

To conclude his speech, Ruffin notes religion as a positive role for slaves. Because they were enslaved, they were introduced to Christianity which Ruffin says was the single greatest thing to happen to the black race.

Along with his feelings of abolitionist misunderstanding, Ruffin also noticed an increase of “excitement” on the slave question. The legality of slavery became a popular topic within court rooms and legislatures across the nation. As the nation neared closer to Civil War, the slavery question became more popular than it was when he was young and when he made his decision in State v. Mann. The introduction of this “excitement” caused Ruffin to decide which stance to align with. Since he owned slaves and believed that slavery was good for white society and blacks, he took a pro-slavery stance.