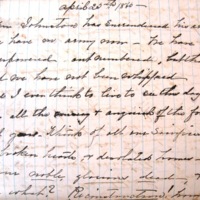 Below is how to properly compare a Union and Confederate account as Sherman marched through the South.  The comparison is approximately one page, double spaced. To cite an item, list the item number in parenthesis at the end of the sentence.

When comparing the Confederate account of Elizabeth Collier, a 21-year-old Confederate woman who was a refugee from Goldsboro,  to the Union account of General C.R. Woods, it appeared that Collier still possessed heavy hatred for the Union, even though the war was essentially over, as if actions taken by Sherman were personal (178 ,169).   Woods, though, saw no reason to continue the destructive patterns of his army as the war was over, and previous actions were just a part of war (169).  In Colliers’ diary entry, from April 25, 1865 in Hillsborough, North Caorlina, she discussed the surrender of Confederate General Johnston to Union General Sherman (178).  Although the war was over, she was bound to never live in peace with the “desecrators of our homes,” which were Sherman’s men (178).  She was also certain that the South would eventually rise again for its cause (178).  The account by Collier differed greatly from that of C.R. Woods.  Woods’ account came from Special Orders No. 76, which he released on April 28, 1865.  Woods knew that the war was over; therefore, his men no longer had a reason to forage abundantly or destroy property as it once had (169).  Woods was serious enough about the measures, as he also promised to arrest anyone that disregarded his orders.  The two different accounts showed that some individuals in the South, like Collier, did not see the actions of Sherman’s men just as acts of war, and heightened her Confederate pride (178).  On the other hand, orders like those by Woods demonstrated that he and his men had carried out previous destruction against the South as war activities, to end the rebellion (169).

← Introduction
Comparison of Union Accounts →
One Union vs. One Confederate Account