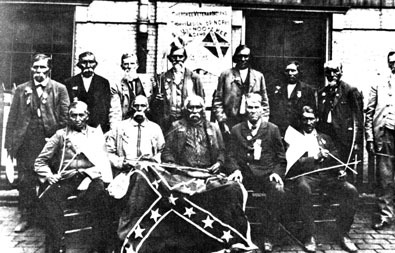 Photo of 1901 reunion of Thomas' Legion, also sometimes known as The 69th Regiment of the North. Photo provided by the Mountaineer newspaper in Waynesville, North Carolina.

Thomas’s legion, sometimes known as the 69th North Regiment was a confederate combat battalion that fought in the American civil War, also known as the War of Northern Aggression. Thomas’s Legion was lead by a businessman from North Carolina named William Holland Thomas, and it was famous for its composition of various types of fighters, most notably the Cherokee warriors.

This exhibition will examine the life and the reputation of William Holland Thomas and his legion, it will illustrate its differences and similarities with traditional regiments, and it will make note of its significance to the civil war in Northwestern North Carolina. The purpose of this exhibition will be to understand the nineteenth century opinion of unconventional confederate soldiers, both of the North and of the South. The goal is to better understand how most Americans viewed the mountain men and the Cherokee Indians in the confederate army, and what place they felt that these men had in the American social hierarchy.

This exhibit will begin with an examination of the life of the man himself, Colonel William Holland Thomas, and then this paper will examine the soldiers that the 69th regiment was composed of, along with their distinctions. The exhibit will continue with an illustration of Northern and Southern Reactions to Thomas’s Legion and finally we will explore the significance of the 69th Northern regiment.