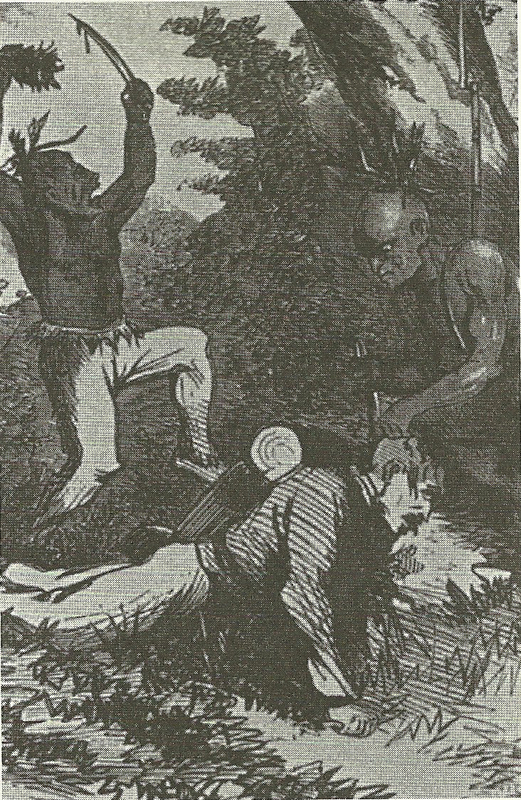 Illustration by Daniel Ellis, portraying the act of scalping reportedly practiced by the Cherokee fighters of Thomas' Legion.

This section is dedicated to the cultural reactions of the Northern as well as the Southern forces to William H. Thomas' Indian regiment. The reactions varied greatly from prejudice, to fear, to awe, and even to admiration.

The North greatly feared Thomas’ Legion, at least for some of the time. Reports that Chief Thomas’ Indian bands were scalping their fallen enemies, like those of the battle of Baptist Gap, were somewhat exaggerated but they still contributed to the fear that the enemy had of them. It was the same for the Confederate troops. Magazine writers seemed to be quite fond of the image of the Indian confederates scalping their enemies. According to Godbold, one writer from the “Greenville Banner” newspaper had written that any man that was contemplating desertion should be aware that Thomas’ Legion was around and that they might scalp deserters if they find them.[vii] vii

William Holland Thomas did not like to hear about these reports of scalping because he knew that such things would only encouraged whites to consider the Indians more primitive than themselves and it would be more difficult to argue for the citizenship of the Cherokee Indian. In cases where he heard of his people taking scalps he had his men relinquish them.[viii] viii

Some northern forces did regard Thomas’ Legion with fear, but overall there seemed to be an underlying feeling of superiority towards the Indian regiments. To exemplify, the battle of Deep Creek was one battle in the civil war that was declared a victory for the North. According to the North, the Unionist soldiers had managed to kill 132, capture 54 prisoners and saw 50 enemies escape. William Holland Thomas found this claim quite amusing because as he recalled they had only lost 5 men while the North had 12 casualties. In addition, there are many stories about units trying to pursue retreating Cherokee forces but they usually could not catch up to them. It seemed that the Northern military has misjudged the abilities of the Cherokee Indians.

The southern reaction to the Cherokee and Highland regiments were not always bad reactions. The examples of loyalty were inspiring to many of the Confederate soldier and the presence of regiments in the northwest helped to produce some volunteers for the confederacy, though many deserted very soon after volunteering.

The spectacle of such an exotic and diverse regiment drew awe-inspired crowds. Just such an occurrence took place in Knoxville Tennessee. Thomsen cites this event and describes the curious but warm faced crowd that had gathered so close to the regiment that the march had to be slowed and wait for the crowd to dissipate before continuing onward. The people of Knoxville were just so fascinated by the sight of a mixed regiment that included Indian fighters.[iv] Ix