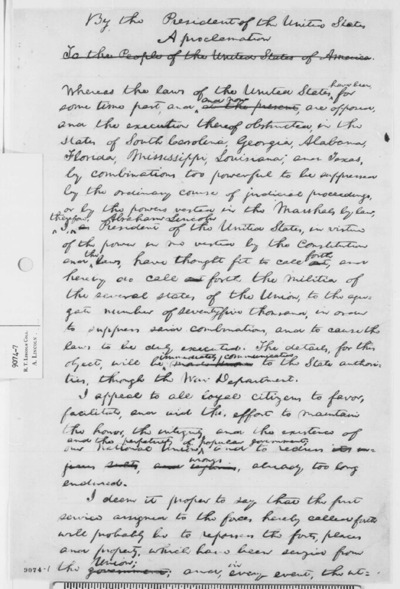 Item 815: President Lincoln's April 15, 1865 Proclamation calling on the states still loyal to the Union to provide 75,000 troops to take back the federal positions in the rebelling states.

It has been argued by some scholars that the South’s newspapers and their editors played a major role in the decision of the Confederate states to secede from the Union. In his book, Editors Make War: Southern Newspapers in the Secession Crisis, Donald E. Reynolds argues that point. In his conclusion he quotes one Virginia paper at the beginning of the secession crisis stating, “Newspapers and telegraphs have ruined the country. Suppress both and the country could be saved now.” He goes on to conclude that “without the press, the task of those who divided the nation would have been infinitely more difficult.” (Reynolds 1966, 217) Other scholars looking specifically at North Carolina, such as T. Harrell Allen in his essay “North Carolina Newspapers and Secession,” argue that even North Carolina’s Unionist newspapers failed in their support of the Union cause, gradually weakening their strong Union stance as the secession crisis wore on.

As the public’s main source of information in antebellum North Carolina, the state’s newspapers and their editors played a major role in shaping public opinion and advocating for the causes and ideals that they believed in. After the election of Abraham Lincoln on November 6, 1860, the state’s press sharply divided into two distinct camps. On one side were the secessionist newspapers, which argued that Lincoln’s election served as a rallying cry for separation from the Union and justified immediate secession, and on the other side were the Unionist papers who argued that the mere fact of Lincoln’s election did not justify the dissolution of the United States of America. While secessionist newspapers viewed Lincoln’s election as the start of an era of Republican tyranny over the South, Unionist papers highlighted what they saw as positive signs emerging from the election, such as increased Democratic majorities in both houses of Congress and argued that, even if the new president wanted to radically curtail southern rights, as the Secessionists believed, he would have no power in the new Congress to push this agenda.

The mood among the state’s population was likewise split. The majority of those in the eastern slaveholding portion of the state advocated secession while those who did not own slaves and the majority of western North Carolinians opposed secession. The Unionist newspapers fought a brief, but valiant, struggle to keep North Carolina in the Union, winning major victories along the way; however, in the span of approximately half a year, public opinion swung almost universally in favor of secession. Although North Carolina was one of the last states to secede, it was a major contributor to the Confederate war effort in terms of both men and material. (Brown 2008, 20)

While the population of North Carolinians living in the east was primarily in favor of secession and the population of North Carolinians in the west was primarily opposed, central North Carolinians were perhaps the most evenly divided, and therefore, the most important swing constituency. This paper will focus on the efforts of three Unionist newspapers from central North Carolina--The Carolina Watchman in Salisbury, The Weekly Standard in Raleigh, and the Observer in Fayetteville--and their attempts to shape public opinion in this key region until events of May 1861 catalyzed public opinion in favor of secession, which the editors could not withstand.

There are two clear schools of thought on public opinion in North Carolina during the secession crisis. One argument holds that Lincoln’s proclamation of April 15, 1861, calling for 75,000 troops to fight for the Union against the Confederacy, was the reason that the Unionist fight in North Carolina abruptly ended. (Item 815) The other argues that although the state as a whole hesitated to abandon the Union in favor of joining the Confederacy, there was, in fact, a gradual shift in public opinion after Lincoln’s election. In Allen’s essay, “North Carolina Newspapers and Secession,” he examines the argument that Donald Reynolds articulated in his book, Editors Make War, in which he quotes Reynolds as concluding that southern editors had “a share of the blame for the most fatal step the South ever took.” (Allen 2008, 125) By examining primarily two Unionist newspapers, The Wilmington Daily Herald and the Greensboro Patriot, Allen largely concurred with Reynolds’ opinion that the public’s mood on secession had been gradually shifted by these newspapers and their editors in favor of secession. Allen stated that he selected these newspapers because they “in the beginning were strongly pro-Union but that eventually would call for North Carolina to secede.” (Allen 2008, 125) However, it is interesting to note that the Wilmington paper, deep in the slaveholding southeastern corner of the state, shifted its position as early as December, and became a strong advocate for separation, while Allen’s analysis of the Greensboro paper, in central North Carolina, only “softened” its position. Clearly regionalism played an important role in the directions these newspapers took. The Herald was a much earlier and stronger supporter of secession than the Patriot ever was.

By examining the reporting and reactions of these three newspapers in central North Carolina to the events of the key dates in the crisis, it can be determined if their positions shifted in favor of secession, like the papers in Allen’s analysis (at least the Wilmington Daily Herald) or if they continued to promote the Unionist cause in central North Carolina until Lincoln’s proclamation made their positions untenable. In fact, the three newspapers examined in this exhibit argued consistently and stringently for their position that North Carolina should remain a part of the Union, showing that public opinion, at least in central North Carolina, remained evenly divided, if not still pro-Union, and the papers continued to advocate for the Union cause in hopes of convincing as many of the region’s readers as possible that the Union could and should be saved. From the election of Lincoln until his call for troops, the Weekly Standard, Fayetteville Observer, and Carolina Watchman unrelentingly and unapologetically opposed secession.