Not all in the South were willing to wait to see what, if any damage, the new president would attempt to do to their way of life. Those in the deep South began to secede from the Union, with South Carolina being the first on December 20, 1860, followed in January by the remaining states in the deep South including Mississippi, Florida, Alabama, Georgia, and Louisiana followed by Texas, which declared its intention to secede in February 1861. With all the states just to the South having already left the Union, North Carolina took a vote on whether to hold its own convention to decide on secession. The vote would be held on February 28, and the Unionist newspapers used their pages to exhort the state’s Unionist population to head to the polls and vote to save the Union. The Weekly Standard made their position on this crucial vote crystal clear in its February 27th edition. On a front page editorial the paper stated, "WE ARE FOR THE UNION -- We have a right to be for the Union, and no man shall dispute that right. Union men of Wake, the most extraordinary efforts are on foot to commit the County to disunion. Are you all ready for action on the 28th? Bring out every vote... Be firm in the cause and active in your efforts, and a glorious victory will be achieved on Thursday next." (Item 825)

At the time of the convention vote, just as after the election of Lincoln, public opinion remained very split on the issue of secession, and the Unionist newspapers knew the vote would be very close. All three papers ran numerous “get out the vote” stories. In keeping with the idea of calm and reason, in its February 26th edition The Carolina Watchman ran a story appealing directly to those that may have been soft secessionists in an article entitled, “A Word to Disunionists.” It stated, "When you go to the polls next Thursday with a disunion ticket in your hands, recall to mind the fact that this Government has never oppressed you. It has borne so lightly upon its citizens that they were scarcely aware of its existence. And protected your interests and your person so effectually, as to banish all fear." (Item 826)

While upon first reading, these pleas by Unionist newspapers to their readers may seem like there had been a shift in public opinion towards disunion; on the contrary, they highlight just how evenly split public opinion on the subject remained. In this historical appeal, the paper continued in its previous arguments that the public should remember what their forefathers sacrificed in order to build the country in the first place and remember the country’s rapid growth and prosperity before deciding to throw it all away. According to the paper, North Carolinians should continue to be cautious and not give into fear. The Unionist papers still believed strongly that there was a majority of Union supporters in the state and that the secession movement was a result of a vocal minority. The Watchman bemoaned, “Oh! what madness! -- and all the work of partizan leaders!” (Item 826)

When the February 28th votes were tallied, the margin was razor thin, 47,323 to 46,672, but in the end it was a victory for North Carolina’s Unionists, and it was touted as such in the Unionist papers. Although it was not talking directly about the Convention vote, in its February 28th edition the Fayetteville Observer ran a headline stating, “Glorious News! -- The Union Saved!!” (Item 830) The headline referred to a compromise that had been voted for in the House of Representatives and also the defeat of a force bill. It is clear both from the reporting of the Convention vote results, as well as other reporting on legislative issues, that the end of February was highlighted by several Unionist victories.

At this point in time the Unionist papers seemed to rely on the will of the people to solve the secession crisis. It was the clear view of the editors that the majority of North Carolinians opposed to secession and it was only the agitation of politicians that extended the crisis. The convention vote and its meaning was reported by the Weekly Standard in its March 6, 1861 edition. “If the Union ticket has prevailed in this State, as we believe it has, it has been emphatically the work of the people; for the politicians have fought for disunion with all the desperation of drowning men.” (Item 831) With the secession convention vote having been defeated, the Unionist editors hoped that the politicians would follow what was now a clear statement against secession from the people of North Carolina and stop pushing for secession. 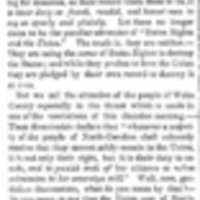 Item 825: Article in the Raleigh Weekly Standard entitled, "The Disunion Programme" from February 27, 1861.

Item 826: February 26, 1861 edition of the Salisbury Carolina Watchman containing an article entitled, "A Word to Disunionists." 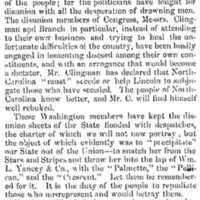 Item 831: Article from the March 6th edition of the Raleigh Weekly Standard.