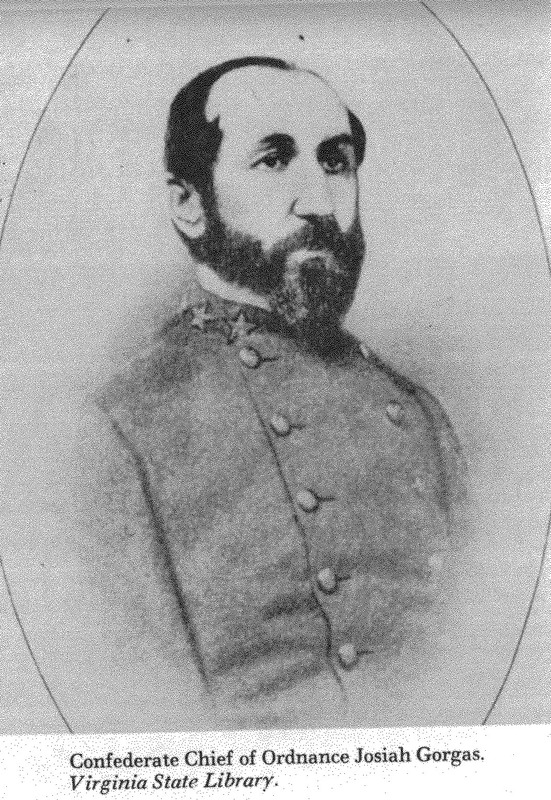 Item 799: Colonel Josiah Gorgas, Chief of the Confederate Bureau of Ordnance, worked tirelessly to construct a fleet of government-owned "ordnance-runners," which almost exclusively put into Wilmington from St. George, Bermuda.

The first of the Confederacy’s High Command to recognize the importance of Wilmington, North Carolina was the Confederacy’s Pennsylvania-born Chief of the Bureau of Ordnance, Colonel – later General – Josiah Gorgas, whose duties included ensuring that the Confederate armies would be supplied with sufficient weaponry and ammunition with which to contend the forces of the Union. One way in which he set out to accomplish this feat was to establish his own line of blockade-runners – blockade-runners that were owned and operated by the Confederate Government, opposed to private interests. His plan was thus: to ship ordnance and other requisite goods from Europe toBermuda. Following that, the supplies would be run into the closest Confederate port atWilmington,North Carolinaon theCape Fear River. Gorgas choseWilmingtonbecause of its closeness to Bermuda, its easily defensible inlets, comparatively “excellent railroads,” which ran to up and down the Confederate coast, and the fact that it was the nearest open port to the theater of action inVirginia. (Wise 1988, 95) (Vandiver 1947, xvii).

Gorgas quickly assembled together a fleet of “ordnance-runners,” and on December 13, 1862, the Colombia became the first of numerous Confederate-owned vessels to put into theport ofWilmington. (Wise 1988, 97) A telling act that denoted the importance that Colonel Gorgas placed upon the port of entry was his decision to appropriate a representative of the War Department to “supervise the landing and shipping of supplies, to keep a supply of coal on hand, and [to] handle all wharfage matters” in Wilmington as they related to the Ordnance Bureau’s depot. The man he selected was James Seixas. (Wise 1988, 96) This action is important because it completes the picture of Colonel Gorgas’ preparation of, and investment in, the port of Wilmington, North Carolina in order to fulfill the needs of important organs of the Confederate Government: namely the Bureau of Ordnance, but also including those Bureau’s of the departmental heads – members of the Confederacy’s High Command all – that had eventually come to utilize Gorgas’ Wilmington supply line.

Further evidence of Wilmington’s importance to Gorgas and his efforts comes from the letter book of Major Smith Stansbury, who helped to manage the Confederate’s economic and logistical affairs in St. George, Bermuda. St. George was the port where Gorgas’ Confederate-owned vessels would put in for supplies before they would run for Wilmington. A great quantity of these letters discuss Major Smith Stansbury filling orders on Col. Gorgas’ request (item 669), then shipping those orders to Wilmington, which is specifically mentioned as the destination for various vessels owned and operated by the Confederate Government, like the Robert E. Lee, the Colombia, the Eugenie, and numerous others that came and went as operations were expanded upon. (Wise 1988, 96 – 97)

The Confederate operations put into perpetuation by Josiah Gorgas did not remain exclusive to the Ordnance Bureau for long, however. By 1863, other departments and entities connected to the Confederacy’s high command – Lieutenant Colonel I. M. St. John of the Niter and Mining Bureau (item 721), S. P. Moore, the Surgeon General of the Confederate States, and the Secretary of the Treasury, Christopher Memminger (item 784), amongst others – also began to utilize Gorgas’ system, recognizing the importance of Wilmington by their very use of a logistical avenue of which Wilmington, North Carolina was of central importance – an importance hitherto crafted by Josiah Gorgas.

In a later instance on August 31, 1863, Colonel Lamb in Wilmingtonwrote to Governor Zebulon Vance of North Carolina; and the subject of his correspondence was the arrival of the Confederate-owned blockade-runner Gibraltar. It put intoWilmington with what Lamb considered precious cargo, two enormous Blakely Guns, which Lamb believed could completely obliterate the threat iron-clad Union war ships. He petitions Vance to speak to the Confederate High Command and try to obtain one of the guns for the defense ofWilmington. The Colonel provided Vance with what he must have considered good evidence forWilmington’s worth of such heavy ordnance: “The same night that theGibraltar came in three more C. S. steamers came in - the Lady Davis, the Eugenie, and Venus - a fact which shows how important our inlet has become.” (Item 781) Colonel Lamb, like others of higher office, believed thatWilmington’s importance had only been magnified by Gorgas’ apparently fruitful efforts.