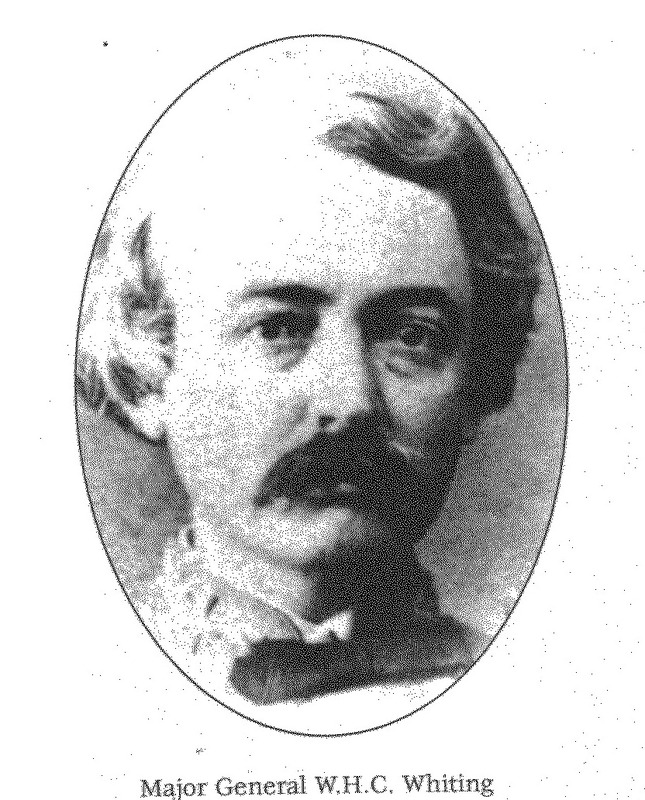 Item 798. Major-General W. H. C. Whiting was a member of the Confederate High Command who commanded the Dept. of the Cape Fear and Wilmington. He was intimate with Wilmington's defenses, but never seemed satisfied, constantly asking for more troops to help guard the - as he perceived of it - precious harbor.

It is certainly strange to think that in a historiography pertaining to the Confederate High Command’s perception ofWilmington,North Carolinathat the Siege of Charleston Harbor inSouth Carolinathat commenced in the summer of 1863 would be of much importance or merit great focus. However, the aforementioned event was centripetal in shaping the attitude of the Confederacy’s high command towardsWilmington. This is not to say, however, that President Jefferson Davis issued an ultimatum declaring the unequivocal importance ofWilmington, and vowed to defend it by any and all means necessary. In fact, Confederate correspondences from this time suggest that the summer 1863 was a time of great exigency on the part of the defenders ofWilmington, and a time of quite surprising laxity and apathy on the part of the Confederate War Department. If in 1862, the logistical masterminds of the Confederacy began to realize the importance of Wilmington, then it was in the summer of 1863 that those men of the High Command most involved in Wilmington’s defense began to realize what sort of a gem they had been tasked with guarding. Their perceptions ofWilmingtonare reflected in their written words.

On the eighth of September in 1863, Major General William H. C. Whiting in charge of the defense ofWilmingtonand the Cape Fear River began a correspondence to the Confederate Secretary of War James A. Seddon as thus: “The city of Charleston may not be taken, but as [a] Confederate port it has well nigh ceased to belong to us. The news of to-day settles that question. In this crisis the importance of this place [Wilmington] grows hourly.” (Item 779) In his correspondence, Whiting was addressing the fact that the Siege of Charleston had, for all intensive purposes, deprived the Confederacy of that port; for whilst Charleston was under siege by the Union, blockade- runners were neither capable of entering nor leaving the city. Dependence onCharlestonwould leave commerce at a complete standstill. Thus, by merit of being left unmolested for the time being,Wilmington, in the mind of General Whiting, had doubled in importance over night; and materially speaking, he cannot be anything but correct. But this work pertains to perception. DidWilmington’s importance “grow hourly” in the minds of the Confederate High Command?

The Correspondence goes on to describe Wilmington’s need for more troops to make defensible its overland approaches. General Whiting even goes so far as to draw parallels between the importance of Wilmington, and the importance of Vicksburg, which had fallen some months earlier. However, Whiting had made please for more troops before this instance. A similar request was made of Seddon in August 31, 1863. (item 780) But Whiting had not then tried to justify his call for reinforcements by citing Wilmington’s importance as a harbor. Further, in his September 8th correspondence to Seddon, Whiting included an endorsement by President Jefferson Davis, who declared that the “importance ofWilmington is evident, and it is desirable to have troops in position to cover the country and its proper defenses.” (item # 780) Jefferson Davis’ endorsement, however, leaves open a lot of room for interpretation. Where do said troops come from? Would they be of the Confederate Government? Or would they come from the North Carolina Militia? Notice also that Jefferson Davis, when writing aboutWilmington, declares it only “desirable” to position troops to defend the approaches toWilmington. The word “desirable” on the President’s part denotes laxity compared to words such as “urgent” or “necessary,” which he could have also chosen. This reflects the President’s perception ofWilmington during this time. It is “desirable.”

Seddon’s response to Whiting does not suggest that he saw in Wilmingtonwhat the General had. On September 8th, 1863, Seddon informed Whiting that he had already spoken about the matter of Wilmington’s defense with Jefferson Davis – recall Davis’ ambiguous terminology – and General Robert E. Lee, and that he could not spare any more soldiers than were already inNorth Carolina. He also suggested that Whiting contact Zebulon Vance for the utilization of North Carolina Militia units to aid inWilmington’s defense. (Item 778) Besides informing Whiting that he had full confidence in him, Seddon offered very little in the way of practical assistance towards the defense ofWilmington, suggesting that he did not buy into Whiting’s logic that the port’s importance was magnified by the Siege of Charleston. And if Seddon had believed Whiting, then he might not have agreed thatWilmington was of any greater importance at that moment than it had been any time before.

Recall the correspondence between Colonel Lamb and Governor Vance pertaining to the Blakely Guns quoted in the previous section. Governor Vance ofNorth Carolinahad endorsed the Colonel’s letter, forwarding it to the War Department, requesting along with Lamb that at least one of the Blakeley guns be permitted to stay inWilmingtonto augment the port’s defense. (item #781) However, it is important to note that both guns went to Charleston, regardless of Col. Lamb’s and Gov. Vance’s pleas. There the guns “remained for the rest of the war, never to fire a shot in anger.” General Beauregard had called for the guns, and the Confederate High Command acquiesced. (Wise 1988, 119 – 121)

What does this say about the Confederate High Command’s perception ofWilmington? Is it that while Governor Vance, Col. Lamb, and General Whiting all sawWilmingtonas more important than besiegedCharleston, the War Department did not share their urgency?

All of the evidence seems to suggest that the Confederate High Command was split overWilmington’s importance during the late summer of 1863. Gorgas’ operations there continued and were expanded upon. But Secretary Seddon refused to allocate Confederate troops to the port’s defense, while President Davis seemed likewise unmoved. However, Whiting, Vance, and Lamb had pressed hard to attain the Government’s help in securing what they had perceived to be the most vital port in the Confederate States.