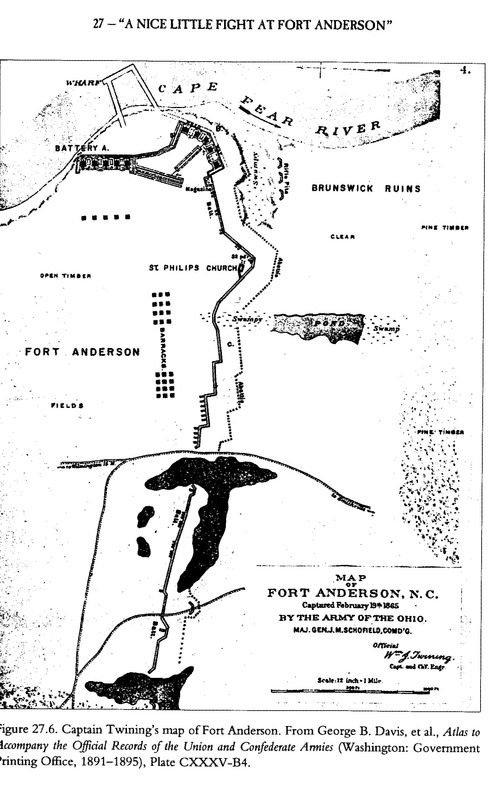 Item 672: Captain J. Twining's Map of Fort Anderson. Forts such as these, which snaked up the entire length of the Cape Fear River all the way to Wilmington, left the Union High Command dubious as to whether they would be able to take the harbor. Such thoughts persisted as late as Junuary, 1865.

The Confederate perspective ofWilmingtoncontinued to evolve during these later years, and a more committed resolve to defending the port eventually came into being, although it seems that it was never fully realized. It was also during these years, however, that the Union began to take notice ofWilmington’s material importance to the Confederacy’s ability to supply itself with the sustenance that drives the machines of war, and began to make plans to takeWilmingtonin connection with one of its other military escapades.

It was General William Tecumseh Sherman amongst the Union High Command who takes the greatest interest inWilmington’s capture it seems. In one telling correspondence in 1865, he pays a backhanded compliment toWilmington’s vigor and defensive strength: “I rather preferWilmington, as a live place, overCharleston, which is dead and unimportant when its railroad communications are broken. I take it for granted the present movement onWilmingtonwill fail, because I know that gun-boats cannot take a fort, andButlerhas not the force or the ability to take it.” (item # 782) In this correspondence there is an interesting parallel between what Sherman was saying in 1864 and what Whiting had said in 1863. Both Generals agree thatWilmington’s strategic importance is magnified byCharleston’s relative “deadness.” However, they diverged in opinion when speaking ofWilmington’s military strength. Major-General Whiting did not believe he could holdWilmingtonunless he had received significant reinforcements. General Sherman believed that neither gunboats nor the Union General Benjamin Butler could takeWilmington, owing to its fortifications, which “gun-boats [could not] take.”

Also in 1864, Governor Zebulon Vance corresponded with Robert E. Lee pertaining toWilmington’s defenses. In a letter dated September 5, 1864, Zebulon Vance responded to some of Robert E. Lee’s earlier suggestions to bolsterWilmington’s defenses usingNorth Carolina’s militia, which Vance agreed to attempt. Seddon had suggested something similar to Whiting in 1863, denoting that there was probably no radical shift in the High Command’s policy pertaining to Wilmington’s defense during the time between the summers of 1863 and late 1864. The Governor in his correspondence with General Lee comparedWilmingtontoCharleston, as had Whiting and Lamb in their earlier messages, with the familiar line: “[…] it cannot be denied thatWilmingtonis now of far more importance to the Confederacy.” (item 776) Governor Vance, in no uncertain terms, perceived ofWilmingtonas vital. General Lee, however, maintained the same policy as had Seddon.

By January 21, 1865, the War was convulsing in its final throws of violence. Still,Wilmingtonhad not fallen, and theUnion’s plans grew bolder. “General Sherman's plans contemplate a devastating march throughSouth Carolinaand intoNorth Carolina. He will draw his supplies from the coast, receiving them by different rivers in South Carolina, and when he arrives in North Carolina from Wilmington […]” (Item 777) Wilmington, having by then become the last Confederate port in the Atlantic, played an important role in the Union’s grand strategy for victory of the Confederate States as it pertains to Sherman’s end. However, even then, there were doubts about its capture: “[…] it is not certain thatWilmingtonmay be taken at the time General Sherman arrives inNorth Carolina[…]” (item # 777)

As late as 1865,Wilmingtonstood strong against the Union; and the Union was uncertain of whenWilmingtonmight fall. Given this realization, maybe the previous section was too hard on Seddon? Owing to the Union’s caution, perhapsWilmingtonwas already sufficiently protected, and allocation of more soldiers on the War Department’s part would have been unnecessary.Wilmingtonwas, after all, the lastConfederatePortto fall, not countingGalvestoninTexas. But that is a material truth, rather than a matter of perception.