General Orders No. 8 was written by Union general Henry Slocum, just as he crossed into North Carolina from South Carolina on March 7, 1865. General Orders No. 8 was announced by Captain and Acting Assistant Adjutant-General to Slocum, Robert P. Dechert. The authorization of this order by Slocum demonstrated how Sherman and other generals of the Union Army expected their men to behave while in North Carolina. Particularly, the document noted how North Carolina was basically coerced out of the Union by the other surrounding Confederate states. Slocum also discussed how many people in North Carolina were pro-Union, as North Carolina did have a large peace movement during the Civil War. With this notion, since North Carolina was not truly willing to leave the Union, Slocum believed that destruction of property and the unkind treatment of citizens should be done very conservatively. The orders, similar to others released in North Carolina, asked Union troops to be careful in their actions, very different from what happened in South Carolina. The main photo is of General Sherman and staff (from left to right): Generals Oliver Howard, John Logan, William Hazen, Sherman, Jefferson Davis, Henry Slocum, Joseph Mower.

Henry Slocum, General Orders No. 8., March 7, 1865, The War of Rebellion: A Compilation of the Official Records of the Union and Confederate Armies; Series I, Vol. XLVII, Part II (Washington D.C.: Government Printing Office, 1895), 719.

GENERAL ORDERS,
No. 8.
HEADWUARTERS LEFT WING,
ARMY OF GEORGIA
Near Sneedsborough, N.C., March 7, 1865.
All officers and soldiers of this command are reminded that the State of North Caronia was one of the last States that passed the ordinance of secession, and that from the commencement of the war there has been in this State a strong Union party. Her action on the question of secession was undoubtedly brought about by the traitorous acts of other States, and by intrigue and dishonesty on the part of her own citizens. The act never even met the approval of the great mass of her people. It should not be assumed that the inhabitants are enemies to our Government, and it is to be hoped that every effort will be made to prevent any wanton destruction of property, or any unkind treatment of citizens. 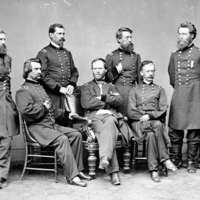 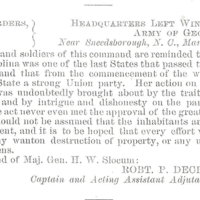