George Nichols, a lieutenant-colonel under Major-General William Sherman of the Union Army, wrote of the armyâ€™s entrance into the city of Fayetteville, North Carolina on March 12, 1865. In his diary entry, Nichols mentioned the arsenal that Fayetteville possessed, which was built, and funded by the United States before North Carolinaâ€™s secession. Nichols articulated the importance of destroying such a building not only because of military reasons, but also because of its beauty, which was â€œthe pride and honor of the state and country.â€ Even though the treatment of North Carolina was less harsh than South Carolina, key buildings, like arsenals, factories and newspaper buildings were burned, to destroy the Southâ€™s physical ability to fight. While in Fayetteville, Nichols also discussed the accusations made by Confederate General Wade Hampton to Union General William Sherman, roughly two weeks prior, on the supposed unnecessary house burning and poor treatment of women and children by Shermanâ€™s men. As the entry stated, â€œHouses have, unquestionably, been burned during our march, but they were the property of notorious Rebels, who were fortunate in escaping so easily,â€ Nichols also denied the harsh treatment towards women and children. The stance by Nichols was typical of many Union troops. He felt the burning of prominent Confederate houses was necessary to help end the war and the foraging that occurred towards women and children was not harsh, but also a necessity. The main image is of the arsenal in Fayetteville.

Fayetteville, March 12th.â€” This morning, the two flanking corps of the grand army, who had not seen each other for six weeks, met in the streets of Fayetteville. They met as soldiers love best to meet brave comrades, on a battle-field; for the Rebels, with foolish pertinacity, refused to give up the place without a fight, and they had their hands full of the work ; for the extreme right and left of our army came together upon concentrating roads, like a well-bent bow in the strong archer's hands, whose arrow, charged with fire, sped swiftly, causing death, reaping victory.
Again we have made a capture of much greater importance than was at first supposed. The magnificent arsenal which our government built here contains millions of dollars' worth of machinery and material. The Rebels have used the work-shops in this city for the manufacture of guns, fixed ammunition, gun-carriages, etc., to a much larger extent than was supposed by anyone outside the Rebel states; always excepting General Sherman, who seems to know everything of this nature. Here are stored vast amounts of well-seasoned woods, weapons in all stages of completion, thousands of muskets; in short, every description of machinery and tools requisite for the manufacture and repairs of material of war. The Rebels tried to remove the most
valuable part, but it was too bulky for easy transportation, and we came forward so quickly that they had hardly time,to save their own worthless bodies. We take possession of this property by a double right. It was originally the property of the United States, paid for by the general government, and was stolen from us ; and again it is ours by right of conquest. We shall destroy it utterly. There is not a piece of this costly machinery but will be broken in fragments ; not a stick of timber that will not be burned to ashes ; not one stone or brick of these beautiful buildings will be left standing upon another. By Monday night that which should have been the pride and honor of the state and the country will be a shapeless mass of ruins. . . .
. . . . Hampton has also taken the excellent opportunity afforded him to issue one of his furious addresses to the people. He charges us with house-burning and all sorts of outrages
upon women and children, and raves in the Billingsgate style ; but, as usual, his fulminations have very little foundation in truth. Houses have, unquestionably, been burned during our march, but they were the property of notorious Rebels, who were fortunate in escaping so easily; while I have yet to hear of a single instance of outrage offered to a woman or a child by any soldier of our army. 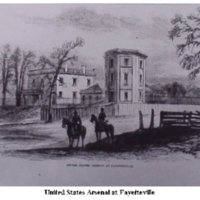 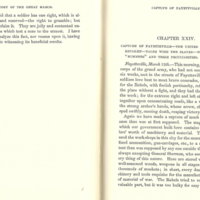 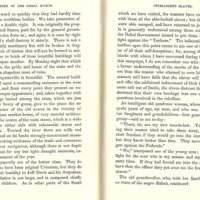 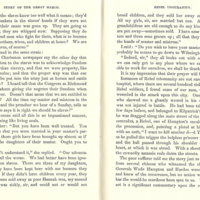 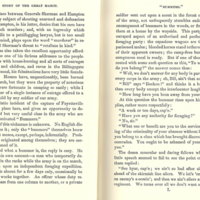 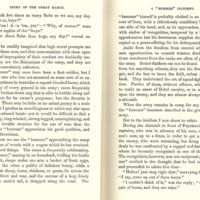 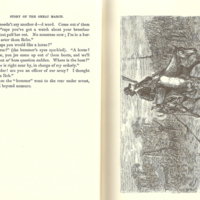