This is an article from 1887 that appeared in Harper’s Weekly.  This was written “at a moment when the bitterness of race prejudice [was] shown in recent school controversies in Kansas, Indiana, and Ohio.”  In 1887, the hope and goal of Reconstruction had simply fallen completely short and racism was rampant throughout the United States.  This article hoped to show that African Americans did not deserve this prejudice through discussing Union veteran George W. Williams’ book which was one of the first books written on colored troops during the Civil War.  The article gave a short summary of the book and noted the “heroism and endurance” that African Americans showed during such battle as Olustee during the Civil War.

At a moment when the bitterness of race prejudice is
shown in the recent school controversies in Kansas, Indi-
ana, and Ohio, reminding us of the old Free States that we
cannot consistently reproach our brethren of the old Slave
States with the same fault, the publication by the Har-
pers of a History of the Negro Troops in the War of the Rebel-
lion, 1861â€”1865, is most timely. It is written by one of
those soldiers, Colonel George W. Williams, and it is a
clear, comprehensive, and compact statement of the whole
subjectâ€”the state of public feeling, the circumstances of
the enlistment, and the services in the field of the colored
troops.

The story is preceded by a view of their part in the war
of the Revolution, and it is an unconscious tribute to the
character of the race. In half of the country they were
held in the worst form of slavery, and in the other half,
although personally free, they were the victims of cruel
prejudiceâ€”a prejudice so acute that even in the sore ex-
tremity of conflict for national existence there was the
strongest opposition to permitting them even to serve in
the ranks. But when the better opinion prevailed and
they were called into the service, at Fort Wagner and Port Hudson and Fort Pillow and Olustee, at Petersburg and Fort Fisher, and on other noted fields, their heroism and endurance were fully tested, and they earned the same gratitude that is accorded to their white comrades in the national army.

Colonel Williams states that during the war there were
178,975 negro soldiers enrolled in the United States volunteer armyâ€”99,337 by the authority of the national government, and 79,638 by the several States and Territories; and of this number 36,847 died in the service of their country.
He tells the story with natural pride and with a glowing
pen, and as the reader follows the narrative of generous
devotion and valor he may well blush with shame at the
long wrong done by the race which prides itself as superior, to a blameless and gentle people. 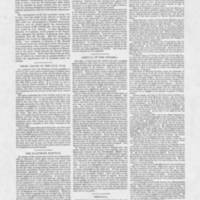