This document is a page taken from the March 12, 1864 Harper’s Weekly, which was a New York political magazine.  The specific article of concern in this paper is entitled “Escaping Union Officers Succored By Slaves” and it discussed an episode where “negroes” helped and protected Union officers escape from a prison in Richmond, Virginia.  The article went on to declare that the African American’s were helping the Union during the Civil War.  One example that the article cited was the First North Carolina and Fifty-fourth Massachusetts fighting in the Battle of Olustee with “unflinching bravery and perfect coolness.”  Both of these regiments were colored and the First North Carolina Volunteers, which would become the 35th United States Colored Troops, was comprised of mainly former slaves from North Carolina that enlisted in the Union army in New Bern during the Union occupation of the coast.  The battle of Olustee was one of the few battles that the men of the 35th USCT would fight in, though records prove that they fought bravely.

The sketch on page 164 represents a party of the
Union officers who lately escaped from Libey prison,
under the guidance and protection of negroes living
in the environs of Richmond. They are conducted
by one of these poor slaves to his cabin for tempo-
rary safety and provision against cold and hunger.
The attitude of the negroes assembled in the cabin,
the apprehension shown on the faces of the prison-
ers who in every sound hear the tramp of Confed-
erate cavalry, and the anxious but determined look
of their guide tell the story better than could any
verbal description. We are tempted, however, to
say one word in favor of these poor negroes. Both
in the South and the North they are helping usâ€”
helping our soldiers that escape from rebel prisons,
and going from our midst to help them fight our
battles for us. Hunted to death by the mobs in our
cities, they retaliate by joining our armies, and they
do their duty on the battle-field. In the late re-
verse at Olustee the First North Carolina and the
Fifty-fourth Massachusettsâ€”both negro regiments
â€”stood their ground with unflinching bravery and
perfect coolness. â€œThe Fifty-fourth,â€ says the
Herald's correspondent, â€œsustained the reputation
they had gained at Wagner, and bore themselves
like soldiers throughout the battle.â€ 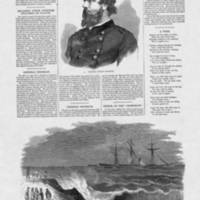