This is a newspaper article from The New York Times that was published on August 21, 1862. At this time, President Lincoln had not yet issued the Emancipation Proclamation and subsequently declared that African Americans could enlist and serve in the Union Army. This article appeared at a time where there was a hot debate over whether or not African Americans, either from the North or the South, should be allowed to join the Union army and help aid in the war effort. This article discussed that debate and offered opinions to the different sides of the argument. In the beginning of the article, it discussed how some of the Northern states were “convulsed” with the idea of enlisting African Americans. The article sways from that opinion when it stated that it could be a good idea to enlist African Americans if they could do so “without weakening the army more than they aid it.” The article then goes on to state reasons why allowing African Americans to enlist could do more harm than good for the Union cause by stating the fear that it could turn some of the Border States against the Union. The article goes on to say that the white troops the Union would lose would not make up for the colored soldiers they would gain. The article finished by discussing the importance African American slaves have to the Confederacy in aiding in labor and that it should be the policy of the United States to deprive these rebels of their aid.

It is remarkable how much fuss resolute zealots can make over a very small matter.  Two or three of our smaller States, to judge from the noise made in them, are quite convulsed on the subject of enlisting blacks as soldiers to fight in the ranks of the Union army.  Gov. Sprague is busy enrolling a regiment of this class of troops,-the Attorney-General of Massachusetts has promulgated an opinion that they cannot constitutionally be overlooked in drafting men for the war, and an able correspondent of the Times, writing in another column, protests vehemently against allowing negroes to shirt their share of fighting.  They are men and citizens, he urges, and therefore have not only a right to be soldiers also, but should by no means be exempt from the corresponding duty.

Now we have no the slightest disposition to balk the wishes of our friends who insist that the negroes shall fight.  On the contrary, we should be very glad to have every able-bodied negro on the continent employed in fighting the rebels-who certainly are none too good to be killed by anybody, black or white, who can get at them;-and we should regard every white man who can this be released from the unpleasant service as so much clear gain to the country.  If the negroes can fight, without weakening the army more than they aid it, put them into the ranks by all means.  This is the only point that gives us any misgivings.  Gov. Sprague cannot probably get more than one negro regiment into the field from his State : -Massachusetts may get two : -possibly a dozen in all might be enlisted in all the Northern States.  If this can be done with the general consent, and without damaging the Union cause elsewhere, very well.  It will add just so many men to the army, and, in the absence of actual experiment, we have no right to say they will not fight as well as the average of other troops, though we somewhat doubt it.

But we fear we may purchase this questionable aid at too high a price.  President Lincoln is reported to have said that the emancipation of the slaves, and their introduction into the Union army, would turn against us 50,000 loyal troops from the Border States who are now fighting on our side.  This may or may not be so.  It certainly ought to be open to some doubt.  But the authority for the statement entitles it to attention, and if it is well founded, its importance entitles it to weight.  We cannot afford to make such an exchange.  The white troops we should lose, if the President’s opinion is worth anything, are far more valuable to us than the black troops we should gain.  Besides, we can see very clearly that the enlistment of blacks is certain to excite a great deal of disaffection and bad feeling at the North.  Bad men already make it a pretext for stirring up prejudice and hostility among different classes of society,-for exciting distrust of the Government, and for discouraging enlistments.  All this is very contemptible and very unpatriotic,-but at the same time it may be very mischievous; and as we can hardly afford just now to accumulate causes of dissention and controversy among ourselves, it may be wise to avoid questions certain to give rise to them, if it can done without too great loss on the other side.  And unless there is a good prospect of getting more help from the blacks than they seem likely, according to present appearances, to yield us, we doubt the policy of pushing the point quite to vehemently as some of our friends are inclined to do.  We don’t think there is any fear that the loyalty and patriotism of either Massachusetts or Rhode Island is likely to succumb at once, even without colored help.  If it is, then by all means let them call on the blacks for aid.

There is one fact, however, which states us in the face, and becomes more and more pressing in its importance every day.  Whether the negroes would be of any service as soldiers or not, they are of infinite service to the revels as laborers.  They are in fact the backbone of the rebellion.  They have supplied the lack of a laboring population in the Southern States, while the mass of the people have filled the ranks of the rebel army.  If there is any way in which the rebels can be deprived of their aid, it ought to be resorted to.  There can be no shadow of doubt in any man’s mind that losses from this body of labor cripple the rebels almost as much as losses from their armies in the field.  Wherever the negro slaves can be reached, therefore, it is clearly good policy that they should be taken from the rebels.  The Confiscation act of last session will probably do as much, if rigidly enforced, as can now be done in any way toward the accomplishment of this object. 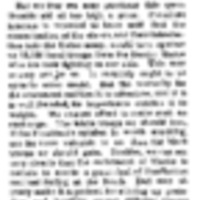