In this order, from March 11, Union General William Sherman laid out his plans for the city of Fayetteville, and what destruction his 60,000 men would bring to the city. Sherman gave orders to his two main generals at the time, Henry Slocum and Oliver Howard, of what they were supposed to do with their two wings. Sherman described, clearly, what items he wanted destroyed. The items Sherman listed ranged from tanneries to arsenals.  Sherman destroyed places of business to help make the war an economic hardship, along with arsenals, which had a clear military importance. While Sherman attacked buildings and factories as strategic war points, to cripple the South’s ability to fight the war, those in the South saw his actions much differently. The destruction of mills, which were vital for food in Fayetteville, left people on the brink of starvation. Sherman just saw the destruction of such items as an act of war against North Carolina. The main photo is of a Fayetteville map, ca. 1865. One can see the arsenal labeled (C.S. Arsenal) near the center of the map.

William T. Sherman, Special Field Orders No. 28, March 11, 1865, in The War of Rebellion: A Compilation of the Official Records of the Union and Confederate Armies; Series I, Vol. XLVII, Part III (Washington D.C.: Government Printing Office, 1895), 779.

HDQRS. Mil. Div. of the Mississippi,

In the Field, Fayetteville, N.C.,

I.   The Right Wing, Maj. Gen. O. O. Howard commanding, will cross Cape Fear River as soon as possible and take roads leading toward Faison’s Station, on the Wilmington and Weldon Railroad, but will not depart from the river until further notice.
II.  The Left Wing, Maj. Gen. H. W. Slocum commanding, will hold the town of Fayetteville, and he will lay his pontoons ready to cross the river, but in the meantime will destroy all railroad property, all shops, factories, tanneries, &c., and all mills, save one water-mill of sufficient capacity to grind meal for the people of Fayetteville.
III.  The cavalry is charged with destroying the railroad trestles, depots, mills, and factories as far up as lower Little River, including its bridge, and will be prepared to cross to the east of Cape Fear River during Monday night.
IV.  Bvt. Col. O. M. Poe is charged with the utter demolition of the arsenal building and everything pertaining to it, and Bvt. Lieut. Col. T.G. Baylor, chief ordnance officer, is charged with the destruction of all powder, and ordnance stores, including guns and small-arms, keeping the usual record.  The time allowed will be Sunday and Monday.
V.  All commanding officers having refugee families or negroes in charge will prepare a train with a small guard to proceed to Wilmington,; after crossing South River an officer will be detailed from these headquarters to conduct them to Wilmington.  A guard of 100 men of each will composed of men entitled to discharge or escaped soldiers and officers will be deemed a sufficient guard
VI.  The army will prepare to lean toward the northeast by Tuesday next. 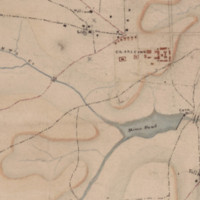