Union General William Sherman wrote the letter to the head of the Union Army, General Ulysses S. Grant, on March 12, from Fayetteville, North Carolina. Sherman discussed general topics, such as the morale of his men, their health and overall conditions. Sherman believed that his men, largely, were in good shape, and would eventually go towards Goldsboro as soon as possible to continue chasing Confederate General William Hardee. In the letter, Sherman wrote of the importance of his march, and how a city like Fayetteville should never be able to possess an arsenal, as it was “such valuable property to a people who have betrayed a trust.” Sherman promised to destroy the arsenal. The destruction of the arsenal was essentially to destroy a valuable resource that a traitorous enemy possessed. Local Confederates took a vastly different opinion, as it was a source of pride for the locals. Sherman finished the letter by discussing the great progress he had made, and Grant had no reason to worry.  The image is of William Sherman’s and Ulysses Grant’s portraits

DEAR GENERAL: We reached this place yesterday at noon; Hardee, as usual, retreating across the Cape Fear, burning his bridges; but our pontoons will be up to-day, and, with as little delay as possible, I will be after him toward Goldsboro. A tug has just come up from Wilmington, and before I get off from here, I hope to get from Wilmington some shoes and stockings, sugar, coffee, and flour. We are abundantly supplied with all else, having in a measure lived off the country.

The army is in splendid health, condition, and spirits, though we have had foul weather, and roads that would have stopped travel to almost any other body of men I ever heard of.

Our march, was substantially what I designed--straight on Columbia, feigning on Branchville and Augusta. We destroyed, in passing, the railroad from the Edisto nearly up to Aiken; again, from Orangeburg to the Congaree; again, from Colombia down to Kingsville on the Wateree, and up toward Charlotte as far as the Chester line; thence we turned east on Cheraw and Fayetteville. At Colombia we destroyed immense arsenals and railroad establishments, among which wore forty-three cannon. At Cheraw we found also machinery and material of war sent from Charleston, among which were twenty-five guns and thirty-six hundred barrels of powder; and here we find about twenty guns and a magnificent United States' arsenal.

We cannot afford to leave detachments, and I shall therefore destroy this valuable arsenal, so the enemy shall not have its use; and the United States should never again confide such valuable property to a people who have betrayed a trust.

I could leave here to-morrow, but want to clear my columns of the vast crowd of refugees and negroes that encumber us. Some I will send down the river in boats, and the rest to Wilmington by land, under small escort, as soon as we are across Cape Fear River.

I hope you have not been uneasy about us, and that the fruits of this march will be appreciated. It had to be made not only to destroy the valuable depots by the way, but for its incidents in the necessary fall of Charleston, Georgetown, and Wilmington. If I can now add Goldsboro' without too much cost, I will be in a position to aid you materially in the spring campaign. Jos. Johnston may try to interpose between me here and Schofield about Newbern; but I think he will not try that, but concentrate his scattered armies at Raleigh, and I will go straight at him as soon as I get our men reclothed and our wagons reloaded. Keep everybody busy, and let Stoneman push toward Greensboro' or Charlotte from Knoxville; even a feint in that quarter will be most important. The railroad from Charlotte to Danville is all that is left to the enemy, and it will not do for me to go there, on account of the red-clay hills which are impassable to wheels in wet weather.  I expect to make a junction with General Schofield in ten days. 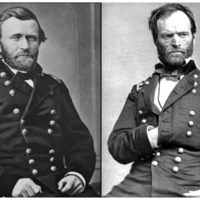