Union General William Sherman wrote the letter to his wife, Ellen, on March 23, from Goldsboro, North Carolina. This was the first letter that Sherman sent his wife since he arrived in Fayetteville, on March 11. In the letter, Sherman discussed the steady progress he and his men had made since they left Savannah, Georgia in January. One also notices the close camaraderie that Sherman had with his men, as he did not want to leave them for a meeting. Sherman was also very proud of them, as he wished to march them to New York to show off to the entire country. But the importance of this letter comes across in how Sherman viewed his tactics, and the destruction he had caused in cities like Fayetteville. Sherman believed that what had happened in Fayetteville, was just a continuance of persistent progress, “to break the pride of the South.” The progress, as Sherman called it, was done to deflate the South’s willingness to fight, which it did not always do. The image is of William Sherman and Ellen (both in the center) with their family, ca. 1880.

Headquarters, Military Division of the Mississippi,

In the Field, Goldsboro, N.C.,

I wrote you from Fayetteville. On our way there the enemy struck on left flank and I turned on him and after three days maneuvering & fighting defeated him and drove him off towards Raleigh.  The fight was near Bentonville, 20 miles from here on the South side of the Neuse in the direction of Smithfield.  I got here today and all the army will be in by tomorrow.  Thus have I brought the army from Savannah in good order, beaten the enemy wherever he attempted to oppose our progress, and made junction with Scholfield and Terry from Newbern and Wilmington on the 21st, one day later than I had appointed before leaving Savannah.  It is far more difficult and important than the Savannah march.  Besides the immediate results we have forced the Rebels to abandon the whole sea coast.   I almost fear the consequences of the reputation this will give me among military men.   I have received one letter from you and one from Minnie, also a vast package from everybody.  I now have a Staff officer Maj. Hitchcock to answer them.  I only have time to make general orders, and to write special letters.  I must be more careful as I find silly people claim my acquaintance publish my letters as extracts.  You know how hurriedly I always write and that I might be falsely placed by such things.  I will be here some weeks.  I should see Grant before assuming the offensive and think he will come down.  I could have time to run to Washington, but prefer to stay with my troops.  It gives me great power with them to share the days and nights.  I always encamped and am now in a shaky fly, open, with houses all around occupied by Rebels or staff officers.  Soldiers have a wonderful idea of my knowledge and attach much of our continued success to it, and I really do think they would miss me, if I were to go away for even a week.  I notice that you propose to take part in a sanitary fair in Chicago.  I don’t much approve of ladies selling things at a table.  So far as superintending the management of such things I don’t object, but it merely looks unbecoming for a lady to stand behind a table to sell things.  Still do as you please.  I have nothing that would engross the profits.  My saddle bags, a few old traps.  I would collect plenty of trophies but have always refrained and think it best I should.  Others do collect trophies and send home but I prefer not to do it.  I have no doubt that you will be sufficiently gratified to know that I have eminently succeeded in this last venture, and will trust to luck that in the next still more hazardous I will be again favored.  I don’t believe anything has intended more to break the pride of the South, than my steady persistent progress.  My army is dirty ragged and Saucy.  I have promised them rest, clothing and food, but the railroads have not been completed as I expected and I fear we may be troubled thereby.  I am just informed that the telegraph line is finished from the sea to this place, so our line of communication will be shortened.  Strange to say we are all in fine health and condition, only a little blackened by the pine smoke of our camp fires.  I would like to march this army through New York just as it appears today, with its wagons, pack mules, cattle niggers and bummers, and I think they would make a more attractive show than your fair.  Give my love to Maj. Taylor if you see him, and if this finds you at Chicago, you will find many who claim me as an acquaintance.  I am glad to hear the children thrive so well I wish you would consult some eminent physician about Lizzies ears.  It may be some simple operation may be of life long service to her.  I will write when more at leisure I am now writing whilst a latter for grant is being copied to go off by a special Courier. Yrs. Ever, 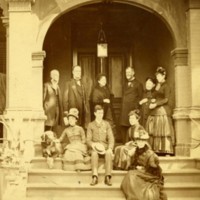