This short article was published in Wilmington, North Carolina, around the same time Sherman entered the city of Fayetteville, on March 11. A pro-Union newspaper, the Wilmington Union of the Herald published the article. Union of the Herald was established in late February 1865, just after the fall of Wilmington and the Confederate stronghold Fort Fisher, to the Union Army in January, 1865. The article wrote of Union General William Sherman’s hard war policy and raiding that he had conducted in Georgia, South Carolina, and now North Carolina. The article focused on the incidents in a favorable light, and as a “novel military experiment.” The article discussed Sherman’s campaigns as legitimate warfare, which was seeing if an enemy could be conquered by such tactics as intense raiding. The view by the pro-Union paper fell in line with what many Union soldiers thought, the tactics of bringing war to the home front, was a legitimate effort to end the war, and crush the South. The image is a picture of the soldiers at Fort Fisher of Wilmington, in 1861, which was one of the last Confederate forts to fall in the Civil War.

Wilmington Herald of the Union

It is usual for those who set about the conquest of a country to act upon the miser’s rules. “Get all you can, and keep all you get.” Hence, they endeavor to secure their acquisitions as they go, and to make each the basis of the next.

Sherman acts upon a different rule. He is simply a great raider. He is conduction a novel military experiment and is testing the problem, whether or not a great country can be conquered by raids.

Results, so far have gained him some reputation for success in making his transits and consequently exhibit the theory on which he is operating under most favorable conditions. 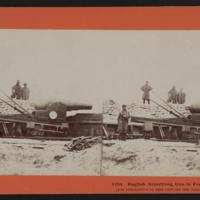