Major General Jacob Cox of the Union Army issued the circular as his men crossed through Johnston County on April 12, 1865, on their way to Raleigh. In the rear of his command, Cox had random accounts of house burning. The burning that occurred greatly upset General Cox. Coxâ€™s attitude was greatly influenced by the surrounding circumstances. Just a few days prior Robert E. Lee surrendered to Ulysses Grant, and peace for most of the East neared. Cox realized the burning that had occurred more liberally in the past was not needed with peace being so close. Cox demonstrated the burning of building, particular homes, had been carried out as a war tactic in the past but as it was no longer needed the burning of personal residences needed to cease. The image is of General Jacob Cox.

Since we left Goldsboro there has been a constant succession of house burning in rear of this command.  This has never before been the case since the corps was organized, and the prospect of speedy peace makes this more than ever reprehensible.  Division commanders will take the most vigorous measures to put a stop to these outrages, whether committed by men of this command or by stragglers from other corps.  Any one found firing a dwelling-house, or any building in close proximity to one, should be summarily shot.  A sentinel may be left by the advance division at each inhabited house along the road. To be relieved in succession from the other divisions as they come up, those left by the rear division reporting to the train guard and rejoining after the next halt. 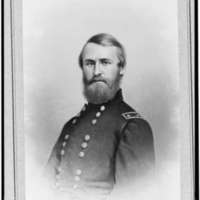