Murdoch wrote to the Z. B. Vance on July seventh, 1864 from Asheville, North Carolina. Murdoch probably knew the Governor well because he addressed the letter to Zeb. He reported about the conditions in the western part of the state. He updated the Governor on a new officer in training. He expressed his confidence in the new officer. He also mentioned meeting Vanceâ€™s mother. He wrote about a widow in the town that was harboring deserters that were her sons. He stated that the men were hiding in the mountains.

Dear Zeb,
[stille] some of those ladies who I saw in Raleigh on their mission for cotton cards. I come before you now on a begging trip if is to ask you should they be any good gray cloth on and for officers are to [leh] me have about 4 yards is as much as is allowable, and this only if it does not do any injustice to officer better entitled to it than I. I would send the registrar if the money but neither I know the from of the of the one nor the people [arnosmh] of the other, since my [retomor]. I have [been] Republic quiet fury a paid [site] some of the Christian counties hurring been snade I summon say Franklin's burn Col [Palmiris] reports that [lee] has information the are [Salisling] but even still under notes for the [scared]. And I may march [toutighp]. I am quite please with Col Pp [prompl] [military] [marmon]and every one hereafter seems to have perfect confidence in him. although only a short time this place he has the topography of the county at his finger end I [isseitie] an earnest desire to protect the citizens in their sights with a short manner of making his officers of their duty which I am sorry to say has not been the characteristics of many of them. this of course is [blotched] new optimism only and [pervatetly] if not being my duty (officially) to [lither] [prvanor] [condedne] other officers. I had the pleasure this morning of meeting your mother [isitis] after a lapse of 13 years, they are all well I will not bore you any longer with [srius] but every kindness and respect to Mrs. Vance.I found the widow Buris for whom I wanted to get the cards is a rank tory and has been harboring deserters for the last year. [and] her sons whom she told [me?] had been captured, have been hiding out in the mountains. In remembrance of your hospitality remain very truly yours - Murdoch 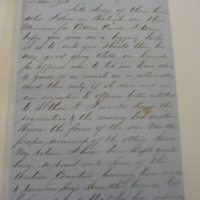 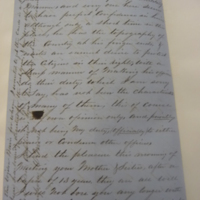