"Report of the Services Rendered by the Freed People to the United States Army in North Carolina," 1864

"Report of the Services Rendered by the Freed People to the United States Army in North Carolina," 1864

Vincent Colyer was a northern white who came down to North Carolina during the Civil War to assist freedmen. He was named superintendent of the poor in New Bern, North Carolina, under General Ambrose Burnside, and this is when he wrote the Report of the Services Rendered by the Freed People to the United States Army in North Carolina, in the Spring of 1862, After the Battle of Newbern (1864). Colyer had first-hand experience with recently freed slaves in North Carolina that had fled to New Bern. In this document, Colyer relayed many aspects of the freedmen’s new lives in New Bern shortly after they escaped bondage. He discussed the arrival of the Union Army in North Carolina and the reaction of the freed slaves. He went on to relay the work done by the freedmen, such as their service as spies and scouts, and he gave examples of actual people that did these jobs or instances involving these freedmen. He also discussed the arrival of the freed people in New Bern, and he commented at the light color of many of the refugees. Colyer wrote about the freedmen’s involvement in church life as well and the availability of hospitals and schools for these former slaves. Colyer finished the document by discussing the justice done to the freedmen under General Burnside and the loyalty and gratitude that they expressed for it. In conclusion, this document gives an interesting description of the freedmen in North Carolina right after they became freed – many of whom would become Union soldiers.

"I commenced my work with the freed people of color, in North Carolina, at Roanoke Island, soon after the battle of the 8th of February, 1862, which resulted so gloriously for our country.

A party of fifteen or twenty of these loyal blacks, men, women and children, arrived on a "Dingy" in front of the General's Head Quarters, where my tent was located. They came from up the Chowan River, and as they were passing they had been shot at by their rebel masters from the banks of the river, but escaped uninjured.

They were a happy party, rejoicing at their escape from slavery and danger, and at the hearty welcome which was at once extended to them, by the officers and men of the New England regiments, which chiefly made up the corps under Gen. Burnside's command."

"The freed people came into my yard from the neighboring plantations, sometimes as many as one hundred at a time, leaving with joy their plows in the field, and their old homes, to follow our soldiers when returning from their frequent raids; the women carrying their pickaninnies and the men huge bundles of bedding and clothing, occasionally with a cart or old wagon, with a mule drawing their household stuff. They were immediately provided with food and hot coffee, which they seemingly relished highly, for they were usually both hungry and tired from their oftentimes long journeys and fastings. Their names were at once registered in the books; and after one night's rest, they would find habitations in the deserted town, and be industriously at work, the men for the Government, and the women for themselves.

Those in the neighborhood of Newbern were ordered to report at my office, as soon as they arrived within our lines. They obtained quarters in the outhouses, kitchens and poorer classes of buildings, deserted by the citizens on the taking of Newbern. They attended our free schools and churches regularly and with great eagerness. They were peaceable, orderly, cleanly and industrious. There was seldom a quarrel known among them. They considered it a duty to work for the United States Government: and though they could, in many cases, have made more money, at other occupations, there was a public opinion among them that tabooed any one that refused to work for the Government. The churches and schools established for their benefit, with no cost to the Government, were of great value in building up this public opinion among them."

"All those gentlemen, without exception, were just, kindhearted and humane men, as their various orders, rules and regulations, issued for the protection of the blacks, would testify, if we had space for them here. And it is to this fact, namely, the great kindness of nearly all the officers under Genl. Burnside, that the well-known activity, usefulness, and contentment of the blacks in the Department of North Carolina are to be attributed."

"Of the seventy-five hundred colored persons under my charge in Newbern, I never knew but one who was suspected of disloyalty. This man was arrested on a charge of carrying salt to the enemy. After the most careful examination, he was acquitted, and left free to go to his home, which was at a small farm near the enemy's lines. Although he was entirely exonerated from all suspicion, he came to me and desired an interview, in order that he might remove all doubts from my mind, if I had any. He was greatly distressed at the mere suspicion.

Of all that I ever met, I cannot remember one that did not love liberty and hate slavery. All desired the success of the Union cause, and the overthrow of the rebellion. Loyalty, with them, was seemingly a personal matter of the most intense importance to pray for, to work, and, if need be, to die for." 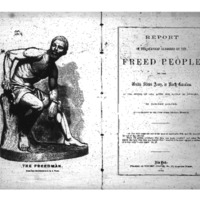