This newspaper article, from Zebulon B. Vance's Weekly Conservative, calls out his opponent, William Holden, for changing the color of his ballots from white, to buff, then to a pale-yellow-chrome color. Ignoring the slanderous vocabulary riddled throughout the article, it is important to note that Holden had originally disputed the legality of using a different color ballot other than white before he began experimenting with colors of his own in order to resemble Vance's ticket.

This was a struggle that began with Holden influencing his supporters to vote with a folded or rolled-up ballot in order to conceal their voting preferences. In response, Vance changed the collor of his ballot specifically so any spectator to the ballot box would be able to determine at a glance if someone was voting for Holden.

While this article claims no tragedy would befall any individual who voted for Holden, it is apparent that there is some reason that Vance wants to distinguish his votes from his political opponent. Whether the threat was real or not, this seems to be a clear threat of voter intimidation, which Vance used in order to manipulate the voting class in North Carolina.

Another Change of Color.

We had no intention of saying anything about the color of tickets that Holden is endeavoring to palm off on the people. He first attempted to make it a crime, not less than a capital felony, because Gov. Vance’s tickets were not printed on white paper. He then perpetrated the same crime he charged upon others by changing the color of his tickets from white to buff – and lastly changed them from buff to a deep chrome yellow. It is all right for Mr. Holden to print his tickets on three different colors – but because we have printed Gov. Vance’s tickets of one color, the crime is unpardonable, and can be atoned for only in purgatory, or a worse place.

We do not deny to any citizen the privilege to vote for whom he pleases, or the kind of ticket he pleases, whether white, buff, light chrome yellow, deep chrome yellow, blue, red, orange – in a word, any one of the seven colors, or any modification of either – or whether it be folded, or “rolled up,” or “spread open.” But, at the same time, we think it is much more creditable to a free citizen, to go to the polls and vote an open ticket. Whatever may be thought of any one who may vote for Holden, no one will kill him or hurt him for the act. If any one is so deluded as honestly to desire to vote for the great secession agitator, by all means let him have a Holden ticket, and let him fold it up, and vote it. We feel confident he will regret it in after years, and deplore his inability to recall it. But let every one vote for Holden that wishes. 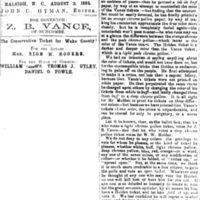