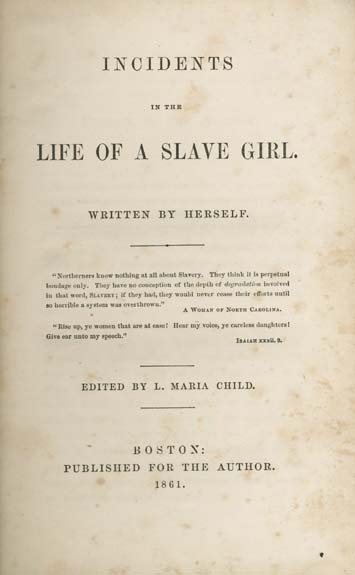 The title page of the original publication.

Harriet Ann Jacobs was born a slave in Edenton, North Carolina, on February 11, 1813. Her father was a carpenter who desired more than anything to purchase his children and give them their freedom. Her father was never able to accomplish this goal, but his perseverance and love taught his daughter the value of family – a value of which she would never lose sight.

She grew up with her brother John never realizing she was a slave mainly because she did not live the typical slave’s life. However, when she was six years old, her mother died and she moved in with her late mother’s mistress, Margaret Horniblow, who treated Jacobs very well and even taught her how to read, write, and sew.[1] From the perspective of an African-American slave, Jacobs lived a very blessed childhood. When Jacobs was twelve years old, her mistress passed away and left Jacobs under the power of very young girl. After serving for a year in her new home, Jacobs was given the news that her father had passed away.[2]

While serving the niece of her late mistress, she became an object of lust for Dr. James Norcom, the young niece’s father, who affected Jacobs both physically and emotionally. Norcom’s wife believed that Jacobs was pursuing and seducing Norcom despite countless appeals that this was untrue. Eventually, Mrs. Norcom later realized that Jacobs was in fact telling the truth and she assured Jacobs that she would be protected from her husband.[3] Jacobs was later permitted to move in with her grandmother nearby the Norcom house.

While enslaved by Dr. Norcom, Jacobs fell in love with a free black man who intended to buy her so that she could be freed. However, despite their love for each other, Norcom refused to sell her. Because of her owner’s stubbornness, she told her lover that he should protect himself by returning north to the Free states.[4]  Jacobs began to consider alternative scenarios that could have possibly lead to her freedom. She eventually concluded that having another man’s children would most likely persuade Norcom to sell her. She entered into a relationship with a wealthy white lawyer named Samuel Sawyer with whom she had two children, Joseph and Louisa.[5] After her children were born, Dr. Norcom allowed her to live at his son’s plantation, but still remained steady in his decision to remain her owner. Jacobs sent her children to live with her grandmother because she was unable to care for them the way she knew a mother should. At that moment, Jacobs understood that her freedom would only be possible if she escaped to the Free States of the North.

She began her escape and came across several people that helped her hide from her pursuers.  Hiding in closets, in bushes, under floorboards, and aboard a ship, Jacobs was constantly on the run, always aware that she was being sought after, and was very afraid that she would inevitably be captured. She made her way to live with her grandmother[6] who was gracious enough to risk her own life by hiding Jacobs in the attic of her home.[7] After a few years spent hiding in her grandmother’s attic, Jacobs pleaded with newly elected congressman and lover Samuel Sawyer to free her family. Her children were taken north where she would soon follow. After spending seven dreadful years stowed away in her grandmother’s attic, Jacobs is smuggled on a ship to Philadelphia, Pennsylvania. Her escape led her to New York, where she experienced firsthand discrimination against African-Americans in the North.[8]  Fortunately, she met a woman named Mary Stace Willis, who was adamantly opposed to slavery, who blessed Jacobs with a job as a nurse for her young daughter. While in New York, Jacobs reestablished ties with her children after having no contact for several years.[9] This moment was particularly important in her life because she had the most true and beautiful love for her children; she recalled that moment saying that “there are no bonds so strong as those which are formed by suffering together.”[10]

Dr. Norcom continued to track Jacobs while she was in New York. However, Jacobs learned of the news that he was coming to find her and she planned a trip to Boston with the help of Mary Stace Willis until he returned to North Carolina.[11] Jacobs eventually decided to move to Boston to further hide from the determined Norcom. While she was in Boston, Mary Stace Willis died, leaving Jacobs heartbroken. However, following the rather untimely death of her friend, Jacobs was asked to join Mr. Willis on a trip to England. In England, Jacobs experienced a different type of treatment – one of respect and freedom. She spent ten months in England and decided to return home to Boston so that she could once again reunite with her family and create a life for them that she now knew to be possible.[12]

After two years in Boston, Jacobs’s brother asked her to help him start an Anti-Slavery Reading Room[13] in Rochester, New York, to promote literacy and knowledge for abolitionists, others in opposition to slavery, and African-Americans.[14] This reading room did not succeed as Jacobs would have hoped, but her move to New York did not result in total failure. She met Amy Post, an antislavery abolitionist who became a very close friend. However, by this time, the Fugitive Slave Law of 1850 had just been passed, giving slave-owners from the South the power and the legal authority to retrieve slaves that had runaway to the North. This new legislation placed a fear in the heart of Jacobs that Dr. Norcom would once again seek to take her back to North Carolina. However, after a month of searching, Norcom surrendered his chase and returned home.

Later that year, Jacobs learned that Dr. Norcom had died and she came to the unbelievable realization that she was finally free. She was eventually bought by a friend and given her freedom legally. She enjoyed nearly fifty years of freedom in the North where she would eventually decide to write her life down for the rest of the world to read.[15]

[1] Literacy was very uncommon among slaves during the antebellum time period. As we will see, Harriet’s ability to read and write helped her push in her journey for freedom.

[4] Jacobs, 41-47. I believe it to be at about this time that Harriet really began to consider running away to gain her freedom. Her actions and what she recounts in her autobiography before this event does not illustrate a desire to flee. However, after Norcom’s stubborn refusal to sell her to a man who she is in love with, she reaches the conclusion that she must do whatever she can to free herself.

[6] Her children were still at this house. It is worth noting that Harriet was never able to communicate with her children even though they all lived in the same house. Harriet was forced to live in the small attic that was not sufficiently protected from the environment. At this point, Harriet is a little older than twenty, making her children around five and one.

[8] Her autobiography mentions the discriminatory act that African-Americans were not allowed to ride in first-class when travelling on a train.  Also, she stays with a reverend that takes her to a gallery giving Harriet a glimmer of hope for the potential that middle-class African-Americans could achieve.

[11] The relationship between Harriet and Mary Stace Willis is the relationship that I feel is the most important human relationship in Harriet’s life. Willis, a white woman, connected with Harriet and was able to trust her with anything, even her own child. Harriet’s relationship with Willis changed how she viewed white people for the rest of her life. She now understood that people should not be judged based on the color of their skin, but rather by their actions.

[13] An Anti-Slavery Reading Room was a gathering place where people united by their opposition to slavery could come and learn more about the politics, economics, etc. in order to stop slavery.

[14] Harriet understood that knowledge was the source of power. She knew that if she was not able to read while she was growing up, she would have been able to read the Bible or newspapers, or understand many things that went on during her life.