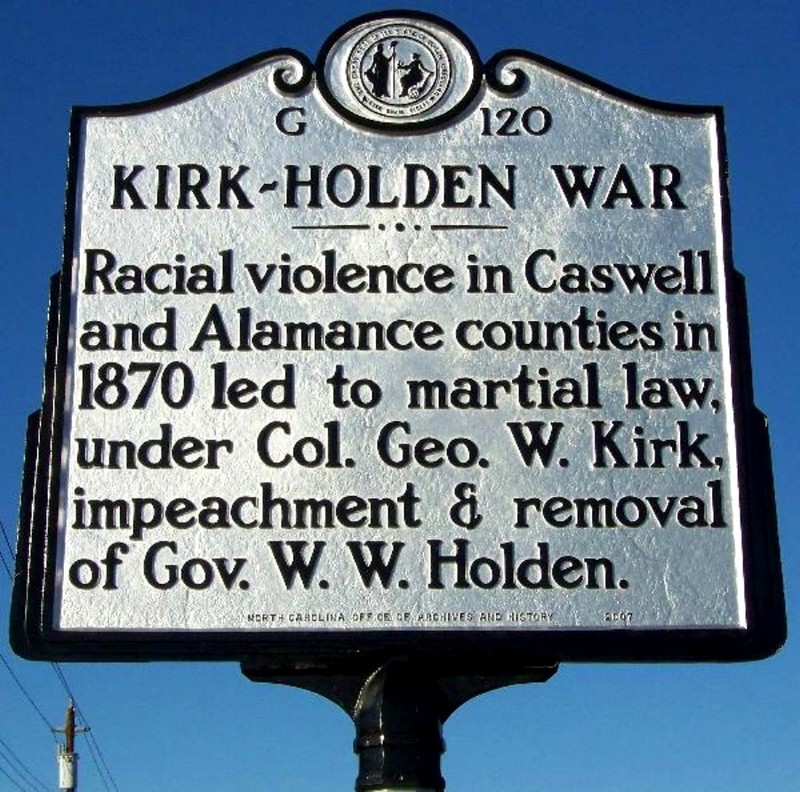 The reasoning behind the impeachment of Governor Holden stemmed from what had become known as the Kirk-Holden War, and the actions the Governor partook during this debacle.  From 1868-1870, terror reigned throughout the Tar Heel State, especially in Alamance County. The Ku Klux Klan had become a powerful organization, running rampant and wreaking havoc on people that opposed their white supremacist beliefs.  One such victim was that of Wyatt Outlaw, a councilman for the town of Graham in Alamance County.  The night of February 26, 1870, Wyatt Outlaw was forcefully removed from his home by members of the Ku Klux Klan and “was hung from the limb of a tree thirty yards from the courthouse door. (Trelease 1971, 205)  The sheriff of Alamance County, Albert Murray, did nothing to attempt to locate the persons responsible for this murder arguing that there was little he could do since there were no possible leads to identifying the villains. (Item 405) The Outlaw murder would send shockwaves throughout the state, demanding Governor Holden’s intervention.

Governor Holden responded to the Outlaw murder and other cases of Klan violence in Alamance by issuing the county in a state of insurrection on March 7, 1870. (Item 54)  In reality, this did very little. Klan violence continued to go unhampered, reaching a new height on May 21st, 1870, with the murder of State Senator John W. Stephens in the Yanceyville Courthouse, in Caswell County. The Caswell Conservatives had held their county convention, with John W. Stephens, a Republican and opponent of the conservatives, in attendance. Leaving the courtroom with the ex-sheriff of Caswell, Frank Wiley persuaded Stephens to follow him to the back of the courthouse where Stephens was overwhelmed by numerous men and murdered. (Trelease 1971, 213) It wasn’t until after the murder of John Stephens that Governor Holden decided to call up a militia to be placed under the command of Col. George Kirk of Tennessee.
(Trelease 1971, 216) Colonel Kirk’s reputation had preceded him from the Civil War. Having led a unit of Union troops during the war, many North Carolinians adamantly detested George Kirk. (Zuber 1969, 33)  Col. Kirk’s men would go on to arrest eighty-two different persons for suspected Klan activity, which would prove to be Holden’s demise. Upon the arrest of these persons, rather than offering
reasoning behind the arrest, the prisoners were simply told that it was per Col. Kirk’s order, who was acting as an agent for Governor Holden, therefore making the imprisonment an order from the Governor. (Zuber 1969, 35)  The Kirk-Holden War would turn out to be the straw that broke Governor Holden’s back, essentially being the entire basis for his impeachment.