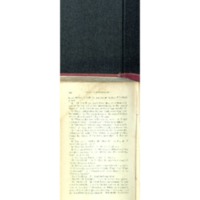 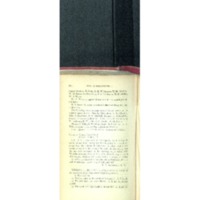 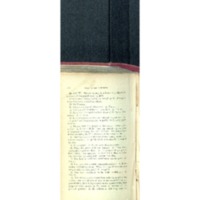 Arguing the fact that an insurrection had not occurred in the counties of Alamance and Caswell, the Board of Managers relied on the testimony of elected public officials from these counties to try and disprove the belief that an insurrection had occurred.  Nine days into the trial, William J. Murray was one of the first witnesses called for upon by the board of managers. Mr. Murray had been sheriff of Alamance County from 1860 to 1868, serving as deputy sheriff during the Kirk-Holden War. Questioning Mr. Murray, William Graham began by asking the deputy sheriff about his basic duties, to which Mr. Murray truthfully answered. Graham continued questioning Mr. Murray by asking if he had any knowledge of “any resistance to the law in the execution of any process or in the execution of any duty of any officer in the county of Alamance during the period of 1869 and 1870?” To which Mr. Murray responded, “Not at all, to my knowledge.” (Item 426)  Mr. Murray’s testimony is detrimental to the argument against insurrection because the Board of Managers was trying to show that the local authorities were in complete control. Murray’s testimony is also important because in the respondents cross examination by Nathaniel Boyden, Boyden questions the deputy sheriff about the murder of Wyatt Outlaw and the Ku Klux Klan.  Mr. Murray responded by saying that his brother, the sitting sheriff of Alamance County, Albert Murray, had taken care of the matter.  Mr.
Boyden, in his questioning, points out that Wyatt Outlaw had been elected a commissioner of Graham the first of January, 1870, and that he had been murdered the following February.  Mr. Murray testifies that Wyatt Outlaw had “held a commission in 1869, but he was
not an officer in 1870.” (Item 426) Asking Mr. Murray whether or not Outlaw had any reason to fear taking his office, Murray responded that had never heard a reason for Outlaw to be fearful of any person. Boyden then asks, “Do you know of any secret organizations in the county of Alamance know there as the ‘Ku Klux Klan,’ the ‘White Brotherhood,’ the ‘Constitutional Guard’ or the ‘Invisible Empire?’” (Item 426) Mr. Graham of the board of managers was quick to object.

Mr. Graham’s objection and argument is a pivotal claim of defining an insurrection. Arguing on the admission of evidence of the Ku Klux Klan, William Graham states “before any evidence is admitted upon that subject, it is necessary to show some overt act of resistance to the government.” (Item 519) The Board of Managers argued that an insurrection is labeled as an act of treason against the government, “which is levying war,” and “that there should be proven some overt act of resistance to the government before any other evidence is competent.” (Item 519) Referring to “the trial of Burr,” Graham highlights that the same issue of insurrection appeared before the Chief Justice of the United States and his decision to acquit Burr on the grounds that there was no evidence that portrayed “on overt act of levying war” against the government. William Graham and the Board of Managers referred to “Hale’s Pleas of the Crown” in which they argue that if a group of persons unite to do harm to another person, but have no desire to raise arms against the government, it is not an insurrection but rather a riot.” (Item 519)  Continuing his argument, Mr. Graham highlights that due to the Civil War, the North Carolina Constitution had yet to define the act of treason. Instead, the Constitution referred to an already established rule of treason dating back to the Revolutionary War in which the loyalist Colonel Bryan raised a pro-British regiment against the United States. “But the doctrine is well established that, in order to make a combination an insurrection, which is treason, it is necessary that it should distinctly appear that the combination is for the purpose of resistance to law.” (Item 519)  Mr. Graham’s most sustainable argument lies in the United States Constitution itself. Mr. Graham reads for the court Article III, section III, the constitutions definition of “treason against the United States shall consist only in levying war against them, or in adhering to their enemies, giving them aid and comfort.” Mr. Graham points out that the section continues “that no person shall be convicted of treason unless on the testimony of two witnesses to the same overt act, or on confession in open court.” (Item 519) Admitting evidence regarding the Ku Klux Klan made a quick appearance in the trial, being the source of violence in the counties of Alamance and Caswell, and the Board of Managers were opposed to the admission of evidence regarding the Klan. William Graham argued that an insurrection is treason and that since there was no evidence of an “overt act of resistance to the government” then any evidence regarding the Klan must be questioned. He argues
that further witnesses and testimony that will follow in the trial will prove that there was in fact no act of war against the government and that crimes such as rioting and murdering being committed “amount to nothing in an investigation of whether there was or was not an insurrection, without the other evidence.” (Item 519)

The Board of Managers called upon several county officials from Alamance and Caswell County in their prosecution of Governor Holden. One of which was Jesse Gant, a former sheriff, chairman and constable of Alamance County for forty of his sixty-eight year life. Mr. Gant informs the court that he was appointed as the magistrate of Alamance by then provincial Governor Holden following the time “the
constitution was changed.” (Item 529) When questioned about the safety of black people and their political affiliations, Mr. Gant informed the court that he did not see any reason for any man to be fearful of political activity. William Graham further questioned Mr. Gant about his knowledge of any acts of violence against the government of Alamance County in the years preceding the arrival of
Col. Kirk’s troops to which Mr. Gant answered no. Previously informing the court of his recent health issues, he declares that he would not have a problem arresting a person because there was no animosity to the local authorities from local citizens. When cross-examined by the Respondent, Mr. Gant informs Nathaniel Boyden that he had did not have any knowledge pertaining to the White Brotherhood. (Item 529)  The Board of Managers chose their witnesses wisely, being sure to question local authorities that understood there were not any acts of violence against the local governments of the counties in the debate of the trial.