William Graham’s argument in the admission of evidence regarding the Ku Klux Klan is a viable opinion, but Nathaniel Boyden, for the respondent, makes his own valid argument as well.  “It is alleged on the part of the respondent, that there were secret societies or organizations in the county of Alamance…that their object was as we allege, not to take vengeance upon any particular individual, but to defeat the execution of the laws.” (Item 531) Mr. Boyden argues the respondents allegations that the objective of the organization known as the “White Brotherhood” was “that the laws in force, giving rights to the colored people were to be annulled and destroyed by the operation of this secret organization.” (Item 531) Discussing the matter of treason, Mr. Boyden argues that “there were large numbers engaged in these secret organizations and their very object was to overthrow the laws of the country and prevent their execution.” (Item 531) Continuing his argument, Mr. Boyden highlights the Shoffner Act which was passed on January 29th, 1870, stating “that the governor is hereby authorized whenever in his judgment the civil authorities in any county are unable to protect its citizens in the enjoyment of life and property, to declare such county to be in a state of insurrection and to call into active service the militia of the state to such an extent as my become necessary to suppress such insurrection…” (Item 531)  Using the Shoffner Act, Mr. Boyden points out that the North Carolina Legislature had already established a definition of an insurrection and had granted the governor powers to suppress any possible insurrection. (Item 531) Nathaniel Boyden does a phenomenal job of combating William Graham’s argument pertaining to the admission of evidence regarding the Ku Klux Klan, by showing that these organizations were in fact committing crimes in order to overthrow a government’s law.

A key witness for the respondent in the trial was that of James E. Boyd, a lawyer from Alamance County, who revealed to the court that he had been a member of the “White Brotherhood.” Mr. Boyd informs the court that the organization first appeared in Alamance in November of 1868, just before the presidential election, and he himself was initiated shortly after the election.  Mr. Boyd’s testimony reveals specific details about the secrecy of the organization and when presented with the question “if there was a case in court and [Mr. Boyd] was called in as a witness or juror what was to be done then?” (Item 482) Mr. Boyd responded by saying that oath was to protect other members and that “if a member of the organization knew that another member was guilty of a crime, he could not state so in court without forfeiting his obligation as a member of the organization, neither as a witness nor upon a jury.” (Item 482)  The oath of the Ku Klux Klan was read, and Mr. Boyden highlighted the part that stated “…you will never bear state’s evidence against any member of this brotherhood. So help you God.” (Item 482) James Boyd would continue by pointing out that Albert Murray, sheriff of Alamance County, was in fact a chief of a camp of the White Brotherhood during his time as sheriff, something Murray will come to deny.

Nathaniel Boyden continued his questioning of Mr. Boyd by asking the witness if he had ever knew anything about the “Constitutional Union Guard.” Mr. Boyd points out that although he had been initiated in his office in 1869, he had never attended a meeting, and understood that the objective of the C.U.G. was to preserve the Constitution before the fourteenth and fifteenth amendments. (Item
482)  Mr. Boyd’s testimony continues on when he reveals that James Bradshaw, a member of the KKK, had told Boyd that he
had partook in the hanging of Wyatt Outlaw. Nathaniel Boyden goes on to ask Mr. Boyd about “why the organization took the name of ‘The White Brotherhood’ instead of the Ku Klux?” Mr. Boyd responded that Ku Klux was to be the name the public would know them by, but if put on a stand, a member could deny that he had ever been a part of the KKK, since the technical name was “White Brotherhood.” (Item 482)  When questioned about his knowledge of the murder of Senator John Stephens, James Boyd reveals that the Monday after
Stephen’s death, Mr. J. A. Long had told him that Mr. Dickey, another member of the Klan, had said that his murder had been arranged some eight to ten days before. (Item 482) James Boyd’s testimony is detrimental to the respondent’s defense for several reasons. Firstly, he testifies that a member was not to testify against a fellow member in court; secondly, he connects the murders of Wyatt Outlaw and John W. Stephens to the Klan; and thirdly, he testifies that Albert Murray, the sheriff of Alamance County was in fact a member of the Klan while sheriff, and not just a member, but a leader as well.

The defense for the respondent called upon numerous witnesses, a hundred and thirteen to be exact (Zuber 1969, 43), but next to James Boyd’s testimony, the testimony of Albert Murray, the sheriff of Alamance County, is pivotal in clarifying the ShoffnervAct of 1870.  Sheriff Murray does admit to the court that he had been a member of the White Brotherhood, being initiated “in warm weather” but failed to remember an exact month. Albert Murray’s admittance to being a member of the White Brother is crucial to portray the state of the local authorities in the counties of insurrection.  Nathaniel Boyden hammers Sheriff Murray regarding his time as a member of the Klan, and when asked repeatedly about when he left the Klan, Mr. Murray is incompetent on the matter, only being able to rationalize that it was around Christmas 1868.  Nathaniel Boyden wraps up his questioning of Mr. Murray by asking him about the Sunday morning after Wyatt Outlaw was killed. Mr. Boyden asks Sheriff Murray if he had heard of “a large body of armed men” at night in which Mr. Murray says that he had the next morning. Mr. Boyden questions the Sheriff as to why he did not make an attempt to follow any horse tracks on the ground to potentially apprehend any possible suspects involving the murder to which Murray responds, “I thought it was perfectly useless.” (Item 405) Mr. Murray testifies that he felt it unnecessary to try and track down any of the culprits responsible because the parties responsible had already gone back to their homes, wherever that may have been. Albert Murray’s testimony epitomizes the necessity of the State Legislator to adopt the Shoffner Act of 1870, and its definition of an insurrection and the duties of the governor to use militia where need be. 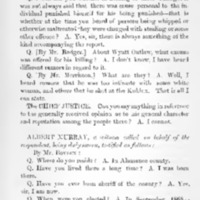 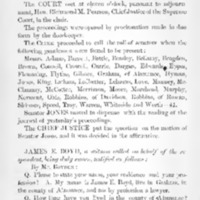