"North Carolina and the Civil War": Commemoration, Sacrifice, and Honor

As part of a statewide initiative by the North Carolina Department of Cultural Resources to commemorate the sesquicentennial of the American Civil War, the North Carolina Museum of History worked to construct a special three-part exhibit to be housed in its military history gallery.  At the time of this essay, only two of the three phases of the series had been displayed, and I will be focusing on the second phase, “The Raging Storm, 1863.”  In November of 2012, “North Carolina and the Civil War: The Raging Storm, 1863” opened to an enthusiastic public.  The exhibit featured many of the museum’s treasures, including dozens of original pieces of weaponry, uniforms, flags, and various other soldier accoutrements (See Item 844).  The purpose of the second exhibit in the series was to recount and honor the experience of “Tar Heel” soldiers in battle, specifically in the context of the pivotal year of 1863.  A November 2012 press release by the museum stated that the exhibit “focuses on a tumultuous year marked with intense battles and devastating loss of life” (http://ncmuseumofhistory.org/wgo/press_11162012.html).

But despite a certainly appropriate thematic emphasis on “carnage” and a “devastating loss of life,” like “Real to Reel,” “North Carolina and the Civil War” represented a problematic strain of Civil War memory, highlighting apolitical themes of sacrifice and valor in place of exploring fundamental Southern and Northern ideological commitments.  However, as an exhibit designed with a specific intent to commemorate a landmark anniversary of the American Civil War, it offered insight as to the dominant narratives in North Carolinian historical memory in a unique and telling moment.

An introductory text panel in “North Carolina and the Civil War” entitled, “1863: A Year of Carnage” read:

"The intensity of the battles that North Carolina soldiers fought in 1862 continued into 1863.  On many occasions, the men helped turn near disasters into victories for the Confederacy.  But the cost to North Carolina proved tremendous.  More than 10,000 Tar Heel soldiers were killed or wounded or died from disease in 1863 alone.  These losses left families and communities at home devastated." (See Item 753)

The message of the panel was clear and permeated the entire exhibit:  1863 represented a time of tragedy and sacrifice for North Carolina soldiers.  However, the panel was extremely telling in that it encompassed many other problematic elements of commemoration that would surface in the exhibit.  Most evident was the tendency to equate the entire North Carolinian experience with the experience of white North Carolinian Confederate soldiers.  While it should be noted that the exhibit was housed in a gallery specified as the “military history” gallery—perhaps suggesting an interpretive strategy dependent upon a narrower range of experiences and sources—it illustrated a particularly limited perspective demographically.  Similarly, most of the artifacts on display reinforced this tendency and were attributed to Confederate origins.  Of course, as the museum’s collection was dominated by Confederate artifacts, this was to be expected.  However, the effect remained for the visitor and material evidence supported subtle textual interpretation; commemoration was somewhat one-sided (See Item 755).

In its utilization of noncritical interpretation focusing on the tragedy of death and widespread destruction in 1863, “North Carolina and the Civil War” tapped into a classic rhetoric of “sentimentalism,” first emerging in the 1880s (Blight 2002, 266).  Reiko Hillyer traced the construction of this interpretive strategy in her examination of the Confederate Memorial Literary Society’s formation of the Confederate Museum in the 1890’s.  Hillyer argued that by strictly focusing on elements of sacrifice, the society helped to promote a less polarizing, albeit problematic valorization of the Civil War soldier and helped to foster reconciliation between the North and South (Hillyer 11/2011).  Similarly, “North Carolina and the Civil War” defined sacrifice simply as a tragic and devastating loss of life.  Material elements helped to support this tone and provided powerful visual examples, which, when read in conversation with each other, painted a comprehensive portrait of death and suffering.  Numerous instruments of death such as swords and revolvers were prominent throughout.  In addition, a feature of the exhibit recounted the horrors and barbarism of battlefield surgery and amputation.  First-person accounts (virtually all from Confederate sources) were also interspersed and emphasized the universal and unquestionable physical, emotional, and psychological pain that accompanied total war.  For the visitor, the overarching narrative and flow of the exhibit followed subtle themes of both patriotic pride and mourning.

On some level, as a rhetorical strategy, the language of “sacrifice” represented loyalty to an inherently morally righteous cause, and therefore offered subtle validation to the Lost Cause of the Confederacy.  For Lost Cause followers, the language of “sacrifice” in many ways functioned in the same capacities as the argumentative language surrounding “states rights,” which insisted that the Southern motivation for secession was not grounded in a desire to preserve slavery, but rather a fundamental commitment to states’ rights.  By sidestepping the narrower contention that secessionists sought to defend a state’s right to preserve slavery, Southerners strategically avoided a key moral issue in favor of a broader, seemingly nobler aspiration.  Likewise, the language of “sacrifice” in “North Carolina and the Civil War” masked more fundamental questions of why Confederate and Union soldiers fought in the first place.  In a commemorative society firmly committed to a tradition of “sacrifice” which only validated the morally righteous, any portrayal of Confederate hardship, suffering, and sacrifice in the Civil War worked as a validation of the Confederate cause.  To “sacrifice” was to give oneself to the greater good.  Framed in this manner, the topic of motivation became secondary to the mutual expressions of courage in Confederate and Union soldiers.  As a commemorative exhibit, “North Carolina and the Civil War” represented an interpretive compromise—a nebulous middle ground between overt patriotism and collective grief. 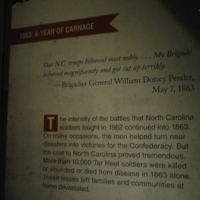 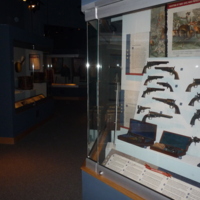 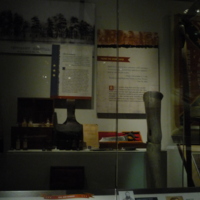 ← "Real to Reel" and the Nostalgic Impulse
"North Carolina in Crisis" and Perspectives of Reconciliation →
"North Carolina and the Civil War": Commemoration, Sacrifice, and Honor