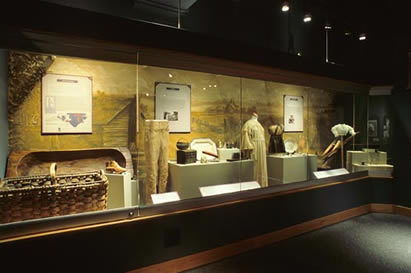 On East Edenton Street in downtown Raleigh, North Carolina, a war is going on.  And though the war has raged for nearly 150 years, many remain unaware of its existence or, more importantly, what is at stake.  As the chief historical institution in the state, the North Carolina Museum of History is perpetually charged with telling the story of North Carolina and the landscape its people have inhabited over time.  In telling that story, no topic or historical period generates more interest than that of the American Civil War.  Serving an enthusiastic public with an impressive staff and an incredible array of historical artifacts, the museum is well-equipped to conceptualize, construct, and maintain popular exhibits which speak to Civil War interest regularly.  Ultimately, the museum seeks to facilitate visitor experiences which foster an understanding of “how the past influences the present” (http://ncmuseumofhistory.org/aboutus/mission.html).  But how might the past influence the ways in which we choose to presently define its meaning?  More specifically, how does the museum function as a forum in which threads of memory might be interwoven in historical interpretations of the Civil War?  In this exhibit, I explore this complex phenomenon in three distinct examples in the North Carolina Museum of History:  “Reel to Real,” “North Carolina and the Civil War,” and “North Carolina in Crisis.”

The intersection of history and memory in the study of the American Civil War, especially the pervasive influence of “Lost Cause” ideology in public commemoration, has been explored extensively in the last 25 years.  The intellectual/literary movement known as the “Lost Cause” emerged soon after the war, and as Wolfgang Schivelbusch has argued, developed as a kind of collective psychological coping mechanism in the American South.  By invoking “a state of unreality,” Southerners could win a moral victory by intellectually denying sectional reconciliation (Schivelbusch 2004, 10).  Common to Lost Cause followers was the idea that the disadvantaged South never stood a chance against an industrially and numerically superior North.  Despite a wealth of godly and morally righteous leaders, the Confederacy—an entity formed on foundational principles of states’ rights—ultimately fell to a depraved Union army intent on demonizing the largely benevolent institution of slavery.  In 1987, Gaines M. Foster offered one of the first and most influential explorations of the Lost Cause in Ghosts of the Confederacy: Defeat, the Lost Cause and the Emergence of the New South, 1865-1913.  Foster analyzed the social and cultural transformation of the American South in the wake of the Civil War, tracking the development of the movement from 1865 to 1913.  Foster’s history of the phenomenon was comprehensive, moving from grief-centered local memorial associations in the late 1860s to the proliferation of more popularized, celebratory movements from the 1880s onward.  Other scholars have since expanded on Foster’s work and explored the topic from a variety of intriguing viewpoints.  David Blight’s Race and Reunion: The Civil War in American Memory perhaps represents the most significant contribution to the field to date on the topic of Southern Civil War memory.  Blight tracked the construction and persistence of “divergent voices” in memory through “reconciliationist,” “white supremacist,” and “emancipationist” narratives (Blight 2002, 2).  Blight argued that contestation of public memory in the 50 years following the war’s conclusion dramatically influenced the ways in which Americans view the conflict today—an assertion also key to David Goldfield’s 2004 work, Still Fighting the Civil War: The American South and Southern History and W. Fitzhugh Brundage’s 2005 work, The Southern Past: A Clash of Race and Memory.

Today, much of the scholarly discourse in the field of Civil War memory tends to focus on the influence of the Lost Cause.  Scholars such as Foster and Blight do well to highlight the material legacy of the Lost Cause through public commemoration, but largely neglect the role of the modern museum in such discussions.  Here, the museum is marginalized in favor of a focus on monuments, iconography, art, and ceremony.  However, some scholars have been successful in expanding the analytical field of vision on the topic.  In Causes Won, Lost, and Forgotten: How Hollywood & Popular Culture Shape What We Know about the Civil War, Gary Gallagher examined the pervasiveness of the Lost Cause myth in American television, film, and art.  I wish to further expand this discussion by bringing a distinct focus to the museum setting.  As an educational setting in which rigorous academic standards of research are emphasized alongside a comprehensive knowledge of material culture and the politics of display, museums continue to fill an important role in society.  As Rosenzweig and Thelen observed, perhaps it is this complex interdisciplinary mesh that statistically makes the museum the most trusted source of historical information in America (Rosenzweig and Thelen 2000, 21).  In terms of immediate impact, then, museum exhibits perhaps hold much more sway than other modes of public commemoration.

In this essay, I rely heavily on the scholarship of Blight, but choose to implement key terminology differently.  I argue that the Civil War exhibits in the North Carolina Museum of History represented an interpretive ambivalence relating to how North Carolinians have chosen to remember the war over time.  My goal in such a strategy is not to criticize the interpretive efforts of the museum as much as it is to analyze how the museum, as “society’s mirror,” worked to reflect the emergent themes in public perception of the Civil War.   I explore how three examples in the museum represented three distinct (and conflicting) threads of Civil War memory.  The first is nostalgia, a mythical vision of an unspoiled antebellum South and a hallmark of Lost Cause ideology, as seen through an exhibit on the production of Gone with the Wind, “From Real to Reel.”  The second is commemoration, a largely noncritical mode of narration which implicitly praises white military sacrifice and valor, as seen through the exhibit, “North Carolina and the Civil War.”  Lastly, I examine reconciliation, as represented in the exhibit, “North Carolina in Crisis.”  Here, it is critical to emphasize that although, like Blight, I choose to employ the term “reconciliation” to explore a thematic trend in museum narratives, in this instance I define it more in terms of its relation to race, not sectional reconciliation (my examination of “commemoration” as a mode of apolitical memorialization of both Union and Confederate soldiers actually matches Blight’s definition of “reconciliation” more closely).  That these interpretive themes are present under the same roof attests the Civil War’s power in the American psyche.  In analyzing how this ambivalence is represented in the museum, then, we might be spurred to consider the nature of our own consciousness, and how 150 years later, Americans continue to struggle intuitively with not only the question of how the war should be remembered, but more importantly, why it must be remembered.

"Real to Reel" and the Nostalgic Impulse →
Introduction