"Real to Reel" and the Nostalgic Impulse

From September 2012 to April 2013, the North Carolina Museum of History housed a temporary exhibit entitled, “Real to Reel: The Making of Gone with the Wind.”  Featuring a wide range of artifacts relevant to the production of the 1939 cinematic classic, Gone with the Wind, the exhibit followed the story of the conceptualization, production, and legacy of the film in American culture.  The exhibit began by discussing the transition of Gone with the Wind from a literary to a cinematic medium and how David O. Selznick envisioned the construction (and subsequent destruction) of Scarlett O’Hara’s antebellum world.  After a series of introductory panels, visitors were invited to follow a hallway of original concept paintings to a screening area, which showed rare footage of auditions and outtakes from the film.  Emerging from the screening room, visitors entered the main gallery, which showcased numerous original props, costumes, posters, and interpretive panels highlighting all phases of the film’s production.  Exiting the main gallery, visitors viewed a series of handmade tribute dolls of Gone with the Wind characters.  Additional panels concluded the exhibit narrative by briefly examining the lasting legacy of the film in American popular culture.

Adapted from Margaret Mitchell’s 1936 novel, Gone with the Wind is commonly acknowledged in popular culture as one of the greatest achievements in cinematic history.  But, inherent in virtually every aspect of the film’s composition (i.e. plot, characters, dialogue, etc.) are themes which directly reflect the pervasive influence of Lost Cause ideology in America during the 1930’s.  Most evident in the film was the theme of nostalgia as reflected through the tragic fall of the O’Hara family plantation, Tara, and the climactic destruction of Atlanta wrought by faceless Yankee troops.  Characters in the film were largely representative of disturbing tropes, such as the bumbling and obedient slave or the valorous and righteous white Confederate male.  Despite such problems, Gary Gallagher wrote that “David O. Selznick’s epic almost certainly has been the single most powerful influence of American perceptions of the Civil War” (Gallagher 2008, 45).  As Gallagher noted, the influence of Gone with the Wind in the formation and perpetuation of the nostalgic thread of Civil War memory cannot be overstated.  The film represented a central tenet of Lost Cause ideology in its construction of a lost, peaceful, simpler, and ultimately better antebellum South.  By commemorating Gone with the Wind in a celebratory manner and offering little criticism of its socially and historically problematic portrayals, “Real to Reel” functions as a subtle validation of the nostalgic tone in the film.

“Real to Reel” essentially focused on the story of a story, rather than the cultural implications evident in the story’s construction.  The narrative of the exhibit was strategically selective, rarely highlighting serious topics of racism or negative influences of the legacy of Gone with the Wind.  Instead, the exhibit served as more of a vehicle through which lovers of the film might experience first-hand key material connections to the film and the famous actors in it.  Original prints, props, and posters littered the main display gallery, but the exhibit’s main draw was no doubt its impressive collection of costumes (See Item 749).  As this particular collection dominated the gallery as the focal point and culmination of the exhibit’s interpretation, it did much to reflect the purpose of the exhibit as less of a complex historical analysis and more of a shrine to Hollywood greatness.

This focus would not be so problematic were the portrayals in the film not so deeply engrained into the collective American psyche.  As Gallagher argued, the nostalgic impulse in Civil War memory is pervasive even today.  Similarly, in Representations of Slavery, Eichstedt and Small conducted a broad study of plantation museums across the American South and ultimately concluded that interpretive efforts in reference to slavery were woefully inadequate and many times inaccurate.  By omitting the experience of African Americans and focusing on the glamour and privilege of a lost white empire, representations heavily contributed to “racialized ways of organizing and understanding the world” (Eichstedt and Small 2002, 3).  This no doubt remains an issue for many institutions, as existing material evidence can often serve as a powerful representation of agency on its own terms; visually, the proverbial big house is overwhelming and beckons any visitor to understand historical agency through its imposing lens.  Likewise, in a largely celebratory exhibit which served to effectively enshrine the material legacy of Gone with the Wind, the perspectives of African Americans were muted.  Indeed, the few examples in which its problematic portrayals of the antebellum South, the Civil War, and African Americans were addressed served as secondary counternarratives in the grander scheme of the exhibit (See Items 724 and 843).  Of dozens of primary text panels in the entire exhibit, only one, “Racial Response,” directly addressed the issue of racial representation.  Even in this example, African Americans and other protesting groups were presented as the main agents of criticism and controversy.  An explicit objection to the racism and prejudices saturating Gone with the Wind from an objective standpoint was virtually nonexistent in the exhibit.  Here, racial portrayals were problematic because these groups believed they were.

Despite a few efforts to interrogate such portrayals, “From Real to Reel” essentially functioned as an implicit validation of the portrayal of the Civil War in Gone with the Wind, despite its historical inaccuracies.  Even the title of the exhibit implied a certain level of veracity, suggesting that the film could work as a vehicle which effectively translated “real” history.  And so, though the driving force in the exhibit narrative was not adequately contextualized in terms of more modern analyses of American Civil War memory, the uncritical “From Real to Reel” in many ways remained as interpretively problematic as the film itself.  Museum visitors, like movie viewers, were left to understand Gone with the Wind, at least in part, as a representation of historical truth. 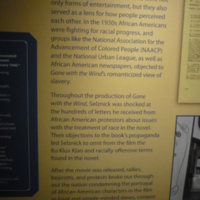 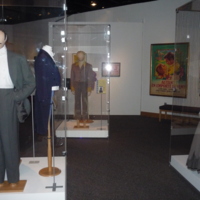 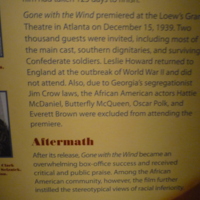 ← Introduction
"North Carolina and the Civil War": Commemoration, Sacrifice, and Honor →
"Real to Reel" and the Nostalgic Impulse